Women's U19s | NI edged out by Republic of Ireland 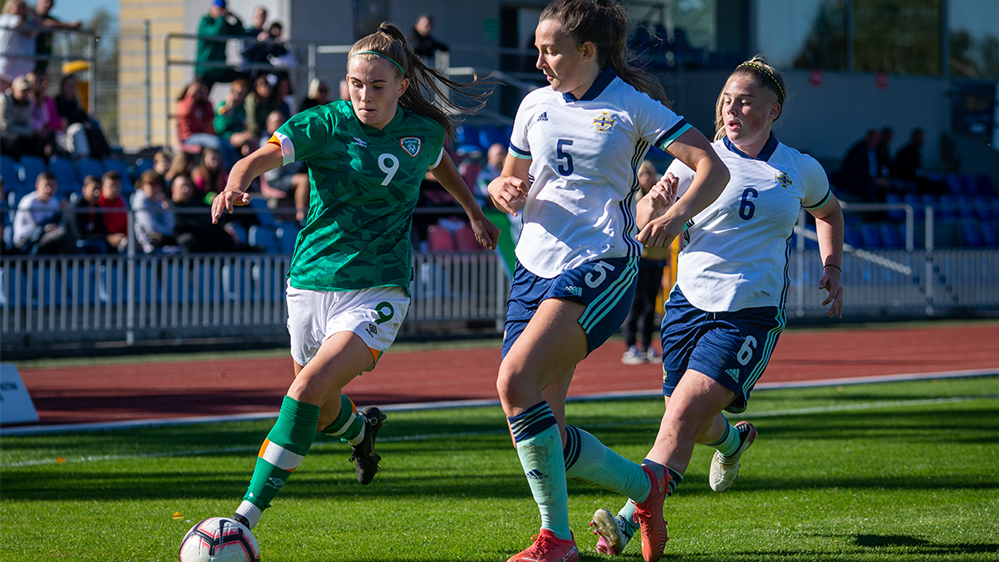 Northern Ireland Women’s U19s were edged out by their Republic of Ireland counterparts in a UEFA Euro 2023 qualifier this morning.

In what was the second of three Group A5 games played in Poland, a first half finish from Emma Doherty proved to be the difference with the Republic running out 1-0 winners.

Northern Ireland started the brighter of the two teams at the Swarzedz Stadium before the Republic made the breakthrough on the 20-minute mark.

Doherty headed home from a Jamie Thompson corner for what would prove to be the winning goal.

The Republic had a series of chances saved by Erin McAllister.

At the other end Sarah Tweedie connected with fellow sub Keri Halliday’s 80th-minute corner but her effort was off target.

Deep into the seven minutes of additional time McAllister again showed her credentials when she saved from Doherty.

Northern Ireland WU19s’ final game of the qualifiers is set to be against hosts Poland on Monday (10 October) at the Plewiska Stadium in Plewiska. Kick-off will be at 1pm UK time.

Aaron Hughes, interim head coach, said afterwards: "There were elements of our first game against France that we spoke about that I thought we tried to do. I thought the girls were brave, I thought they had courage to try and implement the way we wanted to play.

"They were competitive and in no way outplayed. It was a typically tight and competitive game and it came down to really fine margins.

"The goal is a little bit contentious. The referee in the first instance looks like she disallows it. Gives it for a handball, then a free-kick and then appeared to change her mind. Our girls had reset for a free-kick.

"That goal was the difference in the game. Yes, they had a few good chances and I thought Erin McAllister had a fantastic game in goals and made good saves when she needed to, but by no means were we under pressure or getting bombarded.

"I thought we dealt with the physicality of the Republic side really well. We had players in there like Maeve McConaghy who is making her first international appearance and is one of the younger members in the side. Not only are we performing well but we have girls coming in now and bringing quality and gaining experience.

"From a development point of view on this camp they have made huge strides and we now look towards Poland on Monday and hopefully we can finish off with another good performance that shows the squad are headed in the right direction.”