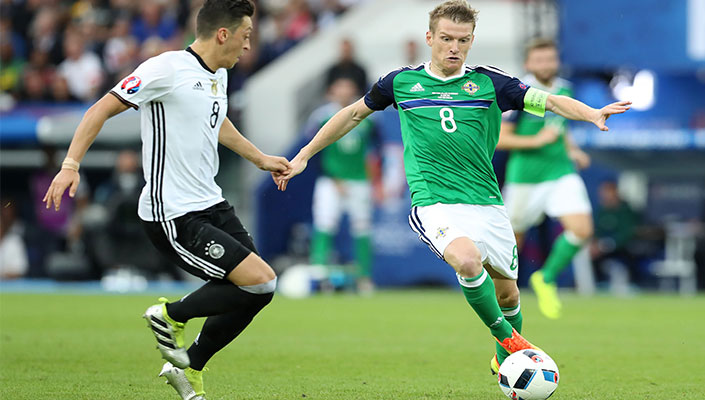 Northern Ireland have qualified for the round of 16 despite Michael O’Neill’s side losing 1-0 to Germany at the Parc des Princes in Paris in their final Group C fixture.

A goal on the half hour mark from Mario Gomez, his first since UEFA Euro2012, gave the Group C winners the three points in what was an admirable performance from Northern Ireland.

O’Neill opted against any changes keeping the same side that produced the 2-0 win against Ukraine at the Stade de Lyon.

Germany would have the majority of possession in the early going and Thomas Müller could have put Joachim Löw’s side 1-0 up after eight minutes if not for a heroic one on one save from Michael McGovern.

Northern Ireland though would play the counter attack perfectly as they broke clear with Conor Washington who couldn’t get a shot away.

Germany continued to press and McGovern proved too good as he kept the opposition at bay, blocking efforts from Mario Gotze & Müller.

23 minutes gone and it was Müller again who created an opening but he could only shoot across the goalmouth and wide.

Three minutes later and Northern Ireland registered their first shot on target as Jamie Ward broke forward but his effort was gathered safely by Manuel Neuer.

But straight on the half hour mark, Germany would get their opener. Müller the provider as he got into the box under pressure and managed to lay off to Mario Gomez who found the gap via a deflection over McGovern.

Müller would continue his attempts to get on the score sheet as he found space in the area but his effort cannoned back off the crossbar and soon after Gomez could have doubled his tally but scuffed his shot into the hands of McGovern as the first half came to a close.

The second half continued to see Germany go for a second and efforts from Gotze and Toni Kroos were either wide or thwarted once again by the magnificent McGovern.

Northern Ireland captain Steven Davis would then brake forward from the midfield but he ran out of room as he tried to get past the strong German backline.

Sami Khedira would provided the next chance for Germany as his effort was saved and the rebound fell to Gomez who couldn’t take advantage as his effort went wide.

Michael McGovern continued his man of the match performance for Northern Ireland as he palmed away yet another effort from Gomez to keep it at 1-0 and that's how it finished.

But defeat didn't dampened the spirits as Northern Ireland qualified for the UEFA Euro2016 round of 16 as one of four best placed third place teams and now have to await their opponent.