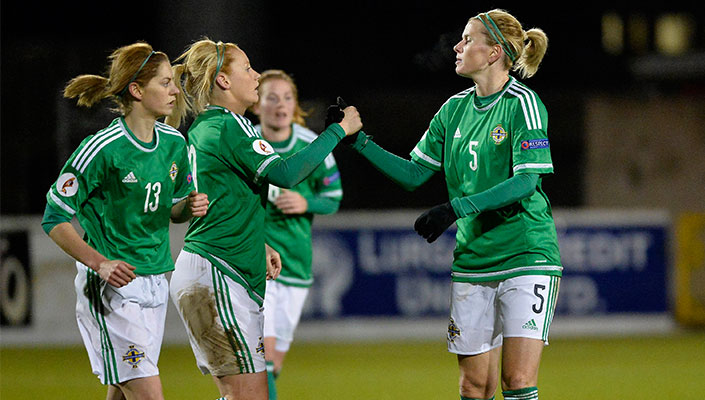 As preparations come to a head before their crucial UEFA EURO 2017 qualifying match against Georgia, the Northern Ireland Women took time out of their busy schedule to meet the future stars of the women’s game.

After dressing up and enjoying a laugh and a joke with the kids, four players sat on a panel ready to be grilled by the knowledge audience at hand. Simone Magill, Emma McMaster, Marissa Callaghan and Julie Nelson were quizzed at the well-attended event.

Players from various clubs and their parents got to know more about the quartet, with questions ranging from their inspiration and heroes to how they got involved in football and how often they train every week.

Manager, Alfie Wylie then took to the floor and described the IFA’s substantial plan for the future of the women’s game in Northern Ireland before fielding questions from the parents.

Alfie stressed the need for “commitment and desire” to be shown across the board as the country enters an exciting stage; both with the current crop of players, those coming through and the girls present from the excellence programme.

Northern Ireland face Georgia on Friday evening at Solitude, with kick-off at 19:30 BST. There will be family fun at the pre-game fan zone, and plenty of good football on show to boot.