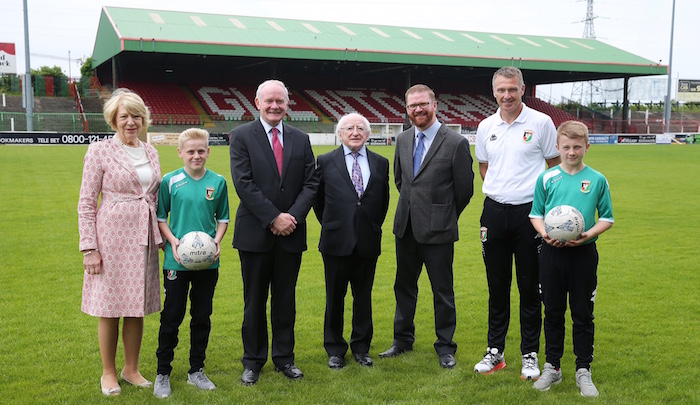 Glentoran FC and Glentoran Academy were delighted to welcome as special guests Irish President Michael D Higgins, Mrs Sabina Higgins, Northern Ireland Deputy First Minister Martin McGuinness and Northern Ireland Economy Minister Simon Hamilton to the Oval today (Saturday 4th June) for the annual Glentoran Academy Awards Day. President Higgins – a former President of Galway United in the League of Ireland – observed the full presentation of awards and met with the captains of the Glentoran Under 16, Under 15 and Under 12 teams. Each of these teams won the Irish Cup at their respective age level in the season just finished.

The Glentoran Academy is making great progress developing football for all. This was clearly illustrated by the fact that 45 players from the Glentoran Academy represented Northern Ireland this season at all age groups and from all 6 Counties of NI.

Formed in 2008, the Glentoran Academy currently has 32 teams with age range 3 to 17 for boys and girls, managed by 75 coaches, all of whom are volunteers. The Academy recently launched a disability section with 31 players, a figure expected to grow to over 50 for next season. The club also has 45 female players and a Polish Language team with 12 boys aged 10.

The Glentoran Academy includes players from all communities and backgrounds from all across Northern Ireland, Its stands as a definitive demonstration of the traditional nature of Glentoran as a truly inclusive, pan-community football club serving both the heartlands of East Belfast and County Down and much further afield. Glentoran strongly supports and adheres to the IFA "Football for All" initiative irrespective of religion, background or ability.

Irish FA Director of Football Development, Michael Boyd, who attended the event said, “Saturday was a fantastic community celebration. Glentoran is an inclusive club, a family club and a community focused club. It was great that the Volunteers at the club and the Parents were praised. I was particularly pleased to see Iain Dickson receive a surprise award for his excellent voluntary work at the club. Girls Football, Disability Football, Futsal, Club and Volunteer Development are key priorities for the Irish FA in our new Youth Strategy, Let Them Play and Glentoran are making significant progress in these areas. The club have exciting plans for the future and it was an honour to attend on Saturday”.

President Higgins, DFM McGuinness and Minister Hamilton in their respective addresses to guests in the McLean Suite at the Oval each commended the club and academy for their commitment to inclusivity and provision of opportunity to young people within both the local and broader community. They also recognised the uniquely iconic position of Glentoran as a sporting and social institution within industrial and post industrial East Belfast and wished the club well with its plans for development in both the immediate and long term future.

The guests visited the Oval Boardroom where they signed the club guestbook and were photographed with the Vienna Cup, the first European club tournament won by Glentoran immediately prior to the outbreak of World War One in 1914.

The Glentoran Academy is an integral part of the Club. Our elite section has 45 players representing Northern Ireland at all age groups both for boys and girls. However our primary and overriding ethos is always to ensure that everyone enjoys both football and friendship at Glentoran, irrespective of ability. Our Academy includes young footballers from all 6 counties and all communities and we are very proud of our disability and Polish language teams that have been added this season. All our coaches and organisers are voluntary and provide a year round professionally run Academy. All of this has been achieved against a barren backdrop in which we have no suitable facilities available to either train or play within East Belfast. Instead our coaches, players and their very supportive parents have to travel across Belfast and North Down to find suitable 3G facilities to hire.  We thank them all for their effort and support.”