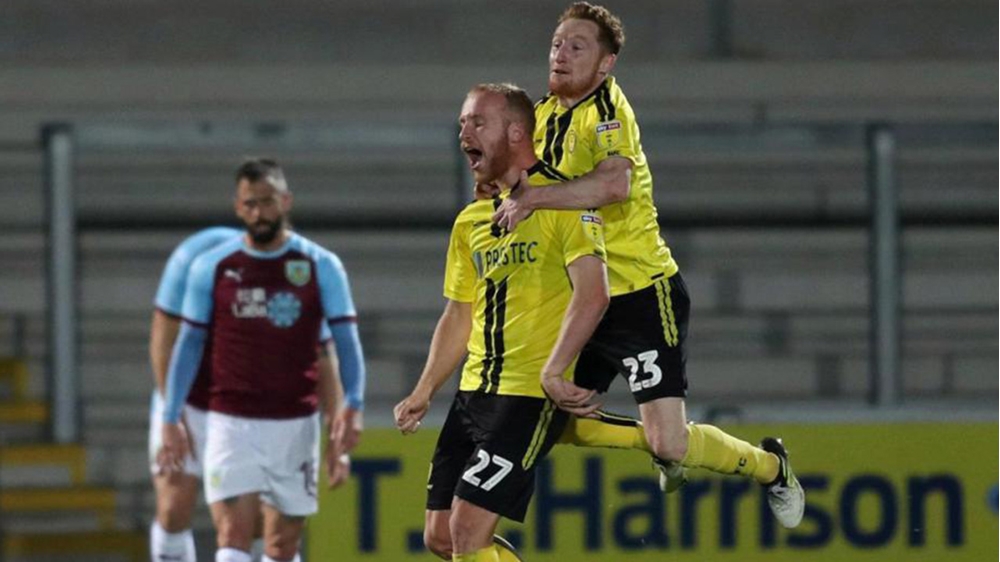 Liam Boyce’s sixth goal of the season helped Burton Albion to a memorable 2-1 victory over Premier League Burnley in the third round of the Carabao Cup last night.

The League One side were a goal down before the former Cliftonville striker netted the equaliser just after the hour mark and then slid the ball through for Jamie Allen to fire home the winner with seven minutes remaining.

Speaking to Burton's official club website, Boyce said: “To go a goal behind to a set-piece was a bit disappointing because we knew how strong they were at set-pieces.

“But to give that kind of performance in the second half, I think it was probably my best.

“I need to hold the ball up in the way that we play so that I can get the rest of the team into the game - I thought that I did that well.

“So it was good to get a goal and an assist and for us to put in such a good second half performance to win the game.”

Elsewhere in the competition, Michael McGovern was in goal as Norwich City progressed to the next round following a 4-2 victory at Wycombe Wanderers while Jamal Lewis played the final 14 minutes for the Canaries after coming on as a substitute.

Paddy McNair made only his third start for Middlesbrough as they disposed of Preston North End 4-3 on penalties after the match had ended in a 2-2 draw. They will be joined in the next round by Jonny Evans and Leicester City who also needed penalties to overcome fellow Premier League side Wolves.

Meanwhile, Jordan Thompson and Ryan McLaughlin were both part of the Blackpool team that recorded a 2-0 home victory over Steve McClaren’s Queens Park Rangers who brought former Linfield starlet Paul Smyth on at half-time.

After the game the Spaniard did have words of praise for the League One outfit. "We spoke with my players about Oxford,” said Guardiola, “and we were really impressed with the way they tried to play and the way they did many things.

“The strikers are strong, the wingers they are so fast, so quick, but we controlled them quite well and we didn’t concede too many chances.”

Finally, Niall McGinn and Aberdeen reached the semi-finals of the Scottish League Cup after a 6-5 penalty shoot-out victory over Neil Lennon’s Hibernian at Easter Road.