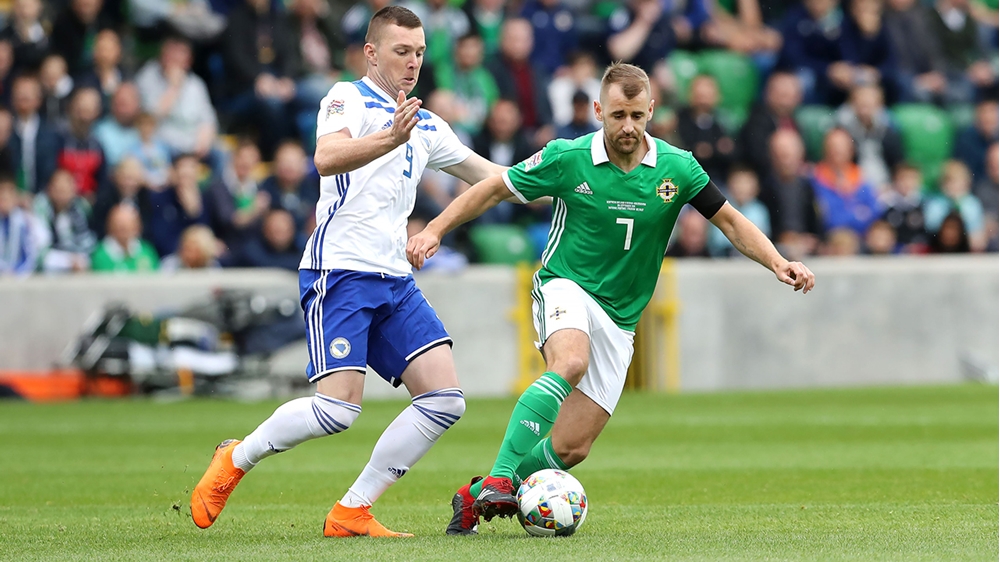 A stunning second half free-kick from winger Niall McGinn earned Aberdeen a point in their Scottish Premiership clash with St Johnstone at the weekend.

It was the 31-year-old’s first goal of the season for Derek McInnes’ side and he admitted he was relieved to have finally got off the mark.

Speaking to the official Aberdeen website, McGinn explained: "I was delighted to get that first goal of the season.

"I caught it well. I have been getting closer and closer with them this past number of weeks so I was delighted to hit the back of the net.

"We have to take confidence from the second half performance. We played well to a man."

"We didn’t really create as many chances as we would have liked in the first half,” added McGinn whose last goal for the club came back in February. “But to come back from a 1-0 deficit, I thought the boys showed good character."

Meanwhile, striker Josh Magennis, who missed last week’s internationals due to injury, came off the bench for Bolton Wanderers to score a consolation goal in the 2-1 home defeat to QPR.

The former Charlton man blasted home a free-kick through the Hoops’ defensive wall to chalk up his fourth goal of the season for the Trotters.

In League Two under-21 international Ben Kennedy scored his third of the campaign as Stevenage drew 3-3 with struggling Notts County.

Jamie Ward made his debut for League One Charlton Athletic following his loan move from Nottingham Forest last month.

The winger played for 75 minutes of Athletic’s 2-0 success at Bradford before being withdrawn - but boss Lee Bowyer was impressed with the 32-year-old’s contribution.

“I was delighted with his performance,” declared Bowyer. "He brings something different to what we’ve got, for sure.

"He’s dangerous in possession. He’s a clever player and gets into dangerous positions, but you can tell he was rusty because he hasn’t played much football.

"But that will come. He’ll be getting better and better every day in training because our tempo is demanding. But we’ll have to look after him for now.”

Elsewhere midfielder George Saville made his debut for Middlesbrough as a 53rd-minute substitute as they fell to a first defeat of the season following their 1-0 reverse at Norwich City.

In the National League Barrow gave forward Rory Holden a first start for the club as they drew 1-1 at Boreham Wood.

The former Derry City player, who starred for Ian Baraclough’s under-21 team against Luxembourg and Spain last week, has joined the Cumbrian side on a month’s loan from Championship outfit Bristol City.

Finally, Motherwell boss Stephen Robinson must wait to see the extent of Trevor Carson’s injury after the goalkeeper was stretchered off in their 1-0 home defeat by Hearts.

Carson was involved in a collision with Hearts striker Uche Ikpeazu just after the half-hour mark which led to the visitors' goal.

"Just looking at the state of his ankle there it doesn’t look particularly good,” stated Robinson. “I’m hoping that it is just a superficial wound but it looks like we will need an x-ray and a scan before we are sure of the damage."