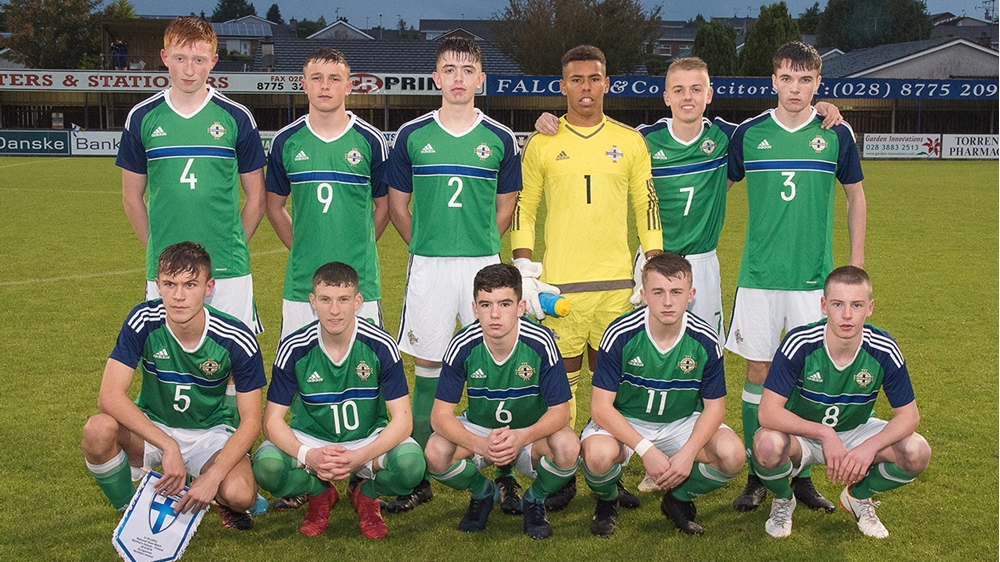 The U16 Schoolboys side faced the Finns in two challenge matches over a three-day period – and Devine said he had taken “a lot of positives” from the games.

Two almost completely different squads were chosen for the encounters in Belfast and Dungannon.

In the first game last week the Schoolboys were beaten 3-1 by the Finns, however the matchday two squad ran out 2-1 winners after a pulsating contest.

“We had something like 29 players to choose from. This is a very strong age group for us and the idea was to give the kids a platform to play on and to give them a taste of international football. It was a very worthwhile exercise,” said the U16s manager.

“We actually played much better in the first game. We hit the woodwork a few times but we were wasteful in front of goal,” he added.

The Finns, who defeated Sweden twice last month, snatched two late goals to record a 3-1 victory in game one at New Midgley Park.

A defensive lapse allowed Casper Terho to open the scoring for Finland with a close range finish after 12 minutes.

Despite the early setback Northern Ireland controlled the play, twice hitting the woodwork, but could not get the goal their dominance deserved.

After the break Northern Ireland continued to press and were rewarded on 53 minutes when centre forward Dale Taylor netted with a low drive.

Soon afterwards Conor Bradley broke through and with only the keeper to beat was brought down by Mika Koskela, who was fortunate to only receive a yellow card. Lewis McKinnon took the spot-kick but saw Finnish keeper Mathias Aahlblas pull off a great save, diving low to his right to turn the shot past the upright.

The Finns then pushed forward and Kai Meriluoto glided past two defenders to finish with a low shot just inside the post.

With four minutes remaining Terho extended the visitors’ lead, cutting in from the left and unleashing a fierce drive which gave Conner Byrne no chance.

In the second game, played at Dungannon’s Stangmore Park, Northern Ireland got off to a great start when Dale Taylor broke through the Finnish defence in the seventh minute and slotted the ball home.

Then Charlie Lindsay saw a fine volley from the edge of the area come back off the underside of the bar before Charlie Allen, fed by Jamie McDonald, fired over from 20 yards. And just before the break Orrin McLaughlin shot wide when well placed.

After the restart the Finns came flying out of the traps and drew level when Denis Cukici netted from close range.

Both teams then threw everything into attack in front of a sizeable crowd at Stangmore Park. It became an end to end contest.

Kai Meriluoto broke through and looked certain to score but was denied by a great tackle by Lewis McKinnon.

At the other end Caolan McBride was just off target with a right foot volley and minutes later his shot from the edge of the area brought a great save from Elmo Henriksson.

With time running out and a draw looking imminent Ross McCausland produced a stunning strike to secure victory for Northern Ireland. The winger picked the ball up on the left and cut inside before unleashing a piledriver into the corner of the net.