Baraclough's side defeat top of the table Spain 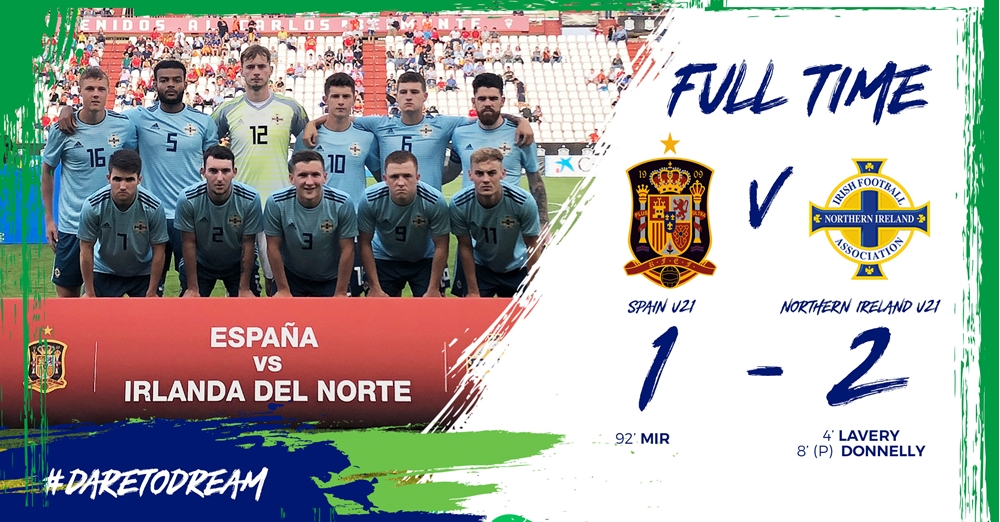 Motherwell defender Liam Donnelly made his record breaking 22nd Under-21 appearance for Northern Ireland as he took the captain's armband once again.

And he was soon celebrating a goal. With four minutes on the clock Shayne Lavery picked a Spanish defender’s pocket close to the half-way line and dribbled up the pitch before neatly slotting the ball into the Spanish net.

Four minutes later Paul Smyth made a superb run into the Spanish box where he twisted and turned before being brought down by Guerrero Martin for a penalty.

On his record appearance skipper Donnelly stepped up and tucked the ball into the right side of the net out of the reach of Antonio Sivera. It was his fifth goal for Northern Ireland’s U21s.

Then the referee adjudged that Ryan Johnson had brought down Mayoral in the box and awarded a penalty. Replays showed there wasn't a touch on the Spaniard and justice was served when Conor Hazard superbly saved the spot-kick.

The Spanish pressure was relentless as they dominated possession in the second half. Chances galore were created by the previously undefeated side. The most glaring miss came from Pablo Fornals. He had the perfect chance to score at the back post but sent his shot from close range flying over the bar.

Northern Ireland keeper Hazard was in fine form throughout and produced save after save for the Under-21s before Rafael Mir got a consolation goal for Spain in the 92nd minute.

A fine collective defensive effort from Northern Ireland saw Baraclough's side successfully navigate seven minutes of added time. The group gave it their all and sealed an historic victory in the process.

Northern Ireland will travel to Iceland for their penultimate Euro U21s qualifying game on 11 October before finishing their campaign at home with a game against Slovakia.