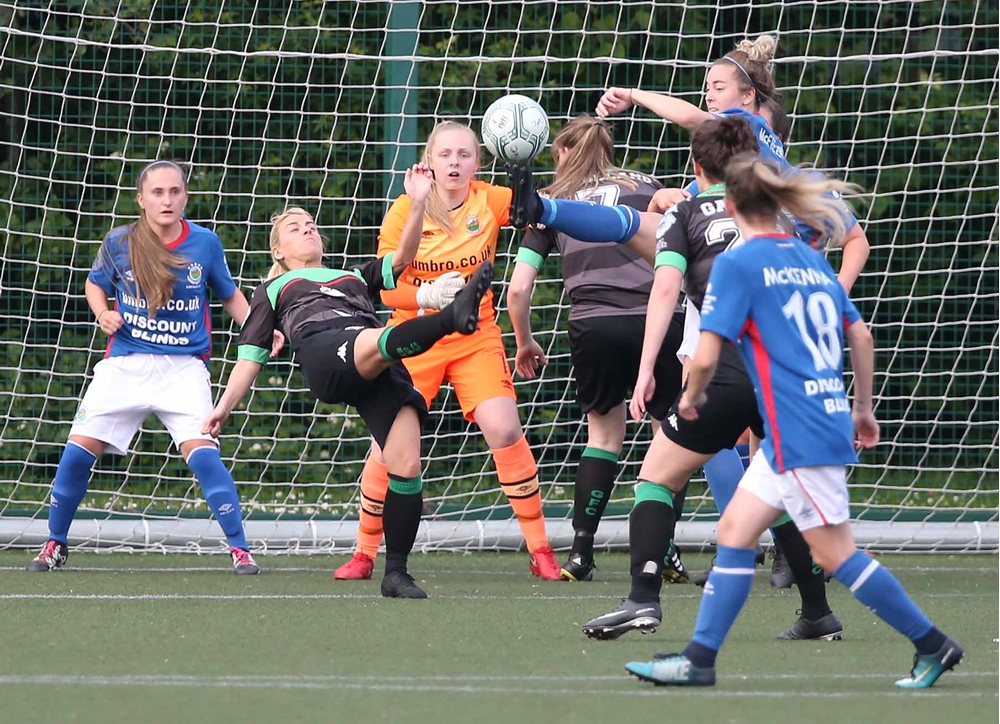 This year’s Electric Ireland Women’s Challenge Cup Final has all the ingredients to be a ding-dong battle.

Having already got one hand on the Danske Bank Women’s Premiership crown and the League Cup in the bag for the second year running, Linfield Ladies are on course for the treble.

But standing in their way are Glentoran Women – and they will not be rolled over easily.

The clash of the women’s teams connected with Northern Ireland’s original ‘Big Two’ should be a fascinating contest at the National Football Stadium at Windsor Park this weekend (Saturday 22 September, 7.30 start).

And both teams ought to have a freshness about them given that last night’s league fixtures were postponed due to Storm Ali.

Linfield Ladies have been all-conquering this season, however the Glens have been in good form lately. The two sides are arguably the best two women’s teams in the country right now.

The Blues have a good blend of youth and experience. They have scored goals galore this season, including 21 in their run to the Women’s Irish Cup decider, and in Northern Ireland internationals Kirsty McGuinness and Megan Bell they possess two of the most potent strikers in the Danske Bank Women’s Premiership. McGuinness has notched more than 20 goals, while Bell is well into double figures.

They also have strength in depth in their squad. Both Northern Ireland keeper Lauren Perry and international striker Alison Smyth are out with long term injuries but it has not hampered Phil Lewis’s side. In fact team captain Sarah Venney reckons the adversity has helped the whole squad to gel.

The Glens have an experienced engine room which includes Northern Ireland international Demi Vance and the combative Kelly Bailie, who has been with the club for more than 20 years.

The east Belfast outfit can hold their own against any team, however the lack of an out and out striker has held them back at times, even if they did score 11 times in their Women’s Irish Cup quarter-final and semi-final ties.

Northern Ireland winger Caragh Milligan has been operating as a lone striker and has done well, however she may find the going tough against a resolute Blues back line.

And the coaches are expecting a tough, close game. Their predictions appear to be spot on given the Blues’ irrepressible league form and the Glens’ decent recent run of results.

Tickets will be available at the gate. They are also available online now via Ticketmaster by CLICKING HERE.

Image: Action from this year’s League Cup semi-final between the Blues and the Glens.