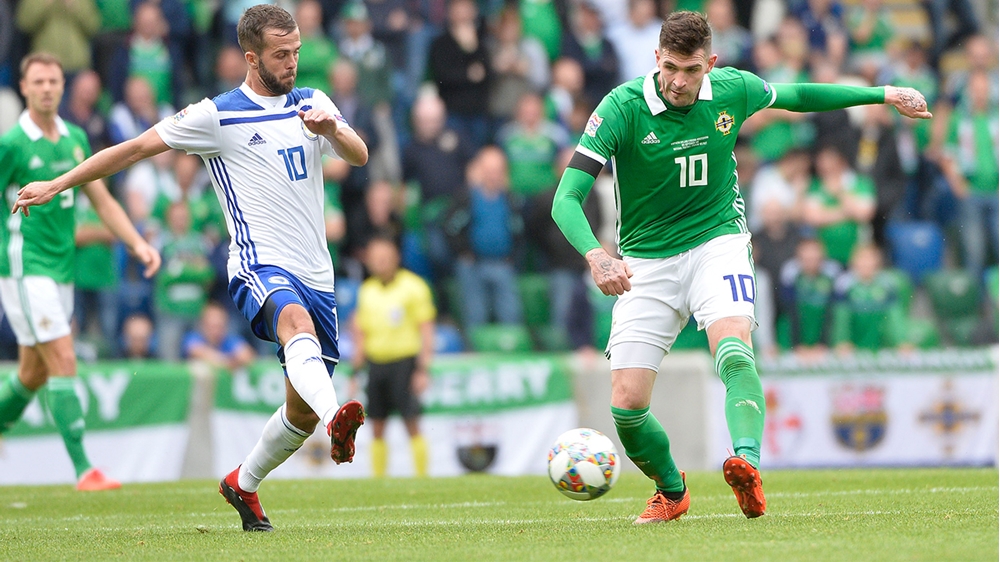 Kyle Lafferty scored his second goal in as many matches after coming off the substitute’s bench in Rangers’ emphatic 5-1 victory over St Johnstone yesterday.

The 31-year-old, who has now scored four goals in his first seven games for Steven Gerrard’s side, took just three minutes to record his first goal at Ibrox in a Rangers shirt since April 2012.

On-loan striker Shay McCartan was on the scoresheet for League Two leaders Lincoln City as they came from behind to win 2-1 at home to MK Dons.

It was the 24-year-old’s first goal for the Imps since joining them on a season-long loan from Bradford City last month.

Also on target over the weekend was Billy Kee who opened the scoring for Accrington Stanley with his fourth of the season as they chalked up their first home win of the campaign following a 2-1 success over AFC Wimbledon in League Two.

Midfielder Ollie Norwood provided an assist for Sheffield United’s second goal in their 3-2 victory against Preston North End. It was the 27-year-old’s third assist since arriving at Bramall Lane from Brighton & Hove Albion in August.

Meanwhile, Niall McGinn also weighed in with an assist for James Wilson’s debut goal for Aberdeen which clinched all three points against Stephen Robinson’s Motherwell.

Motherwell goalkeeper Trevor Carson, who left the field on a stretcher in the defeat to Hearts’ last week, was back between the sticks for the visitors and was disappointed in the manner of his side’s defeat to Aberdeen.

“I think they were there for the taking today,” declared the 30-year-old, “We just couldn’t get going today though.

“It’s disappointing and I think a lot of us need to have a good look at ourselves, me included, it wasn’t good enough today.

Finally, Northern Ireland under-17 midfielder Conor McKendry made his debut for non-league Lowestoft Town as they lost 1-0 to Hanwell in the 2nd Qualifying round of the FA Cup on Saturday.

The 19-year-old from Carnlough joined the Southern Premier League outfit on a month’s loan from Ipswich Town last week.