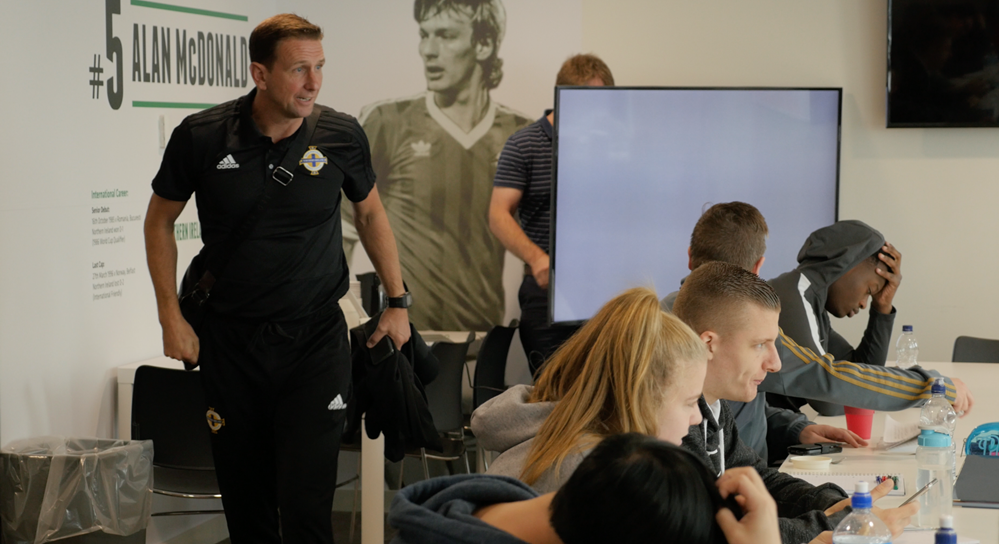 Baraclough, who has more than 30 years’ experience in the game as player, coach and manager, delivered a wide-ranging presentation which covered the ins and outs of football management, coaching, interacting with players and much more.

The U21s boss had a 20-year playing career, which saw him represent Queen’s Park Rangers, Notts County and Scunthorpe United among others, and he compared and contrasted being a player and being a manager/coach.

He further revealed how he prepares his U21 squad for games, using the successful recent trip to Luxembourg (friendly, 1-0 win) and Spain (U21 Euros qualifier, historic 2-1 win) as an example.

The UU course, which is run by the university in partnership with the Irish Football Association, is delivered on a part-time basis at the National Football Stadium at Windsor Park.

It allows students to combine theory and practice with the completion of professional UEFA coaching qualifications along with an undergraduate degree. It covers everything from football policy planning and operations management to performance analysis and coaching science.

The first intake was last September and Baraclough addressed students who are now in the second year of the four-year course. A fresh intake has just started the course.

See video above to find out how the U21s boss fared during his first stint at being a lecturer.