Under 18 Squad Named For International In Glasgow 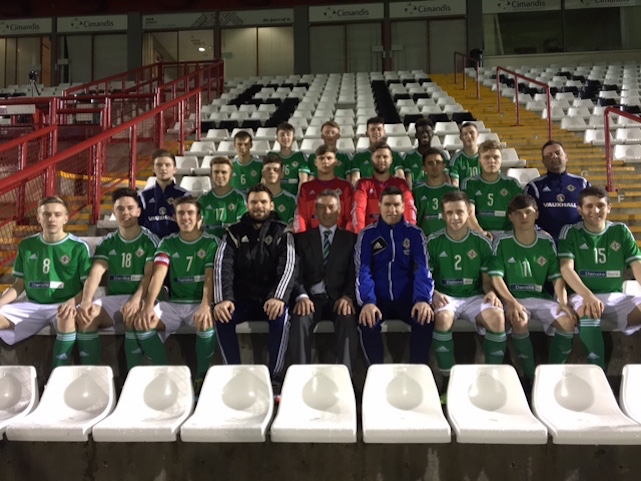 Matthew Shevlin and Michael Kerr replace David Parkhouse and Salou Jallow in the squad which defeated Guernsey and Jersey earlier this month.

Parkhouse misses out through injury and his absence will be a blow to the hopes of regaining the Centenary Shield.  The tall striker was in superb form in the Channel Islands notching a hat trick against Jersey and a brace against Guernsey.  Fortunately, Shevlin is a more than adequate replacement having been capped at Under 17 level this season and appearing regularly for Ballymena United in the Danske Bank Premiership.  Kerr missed the trip to the Channel Islands through injury but he also has international experience having been capped at Under 16 level two years ago.

Joint Northern Ireland manager Frankie Wilson shared his views on the upcoming fixture: “Losing Parkhouse is a setback to our Centenary Shield challenge as I am confident that his partnership with Shevlin would produce goals.  Nathaniel Ferris did very well with a hat trick in Jersey and I hope that he will continue in similar form against the Scots and team up well with Shevlin."

Fellow joint Northern Ireland Manager Conor Marlin commented on his squad’s start to the competition and stated: “Our record against Scotland is excellent at home but in the away fixtures we have dropped points in drawn games that we should have won.  It is essential we collect all three points on Friday night which would set us up for the forthcoming matches against England and the Republic of Ireland.  However, the Centenary Shield is always a very close competition with very little between the teams."

Following the game against Scotland the Northern Ireland team takes on England at Comber on Friday 4 March, kick off 4.00 pm, before travelling to Arklow to play the Republic of Ireland on St Patrick's Day.

The Northern Ireland Schools’ Football Association is offering free entrance to any school or youth group wishing to attend the home game against England at Comber.  Any group wishing to gain free entrance should send their details by email to Edwin Ferris, NISFA Treasurer, at edwinferris@yahoo.co.uk to obtain a group permit.