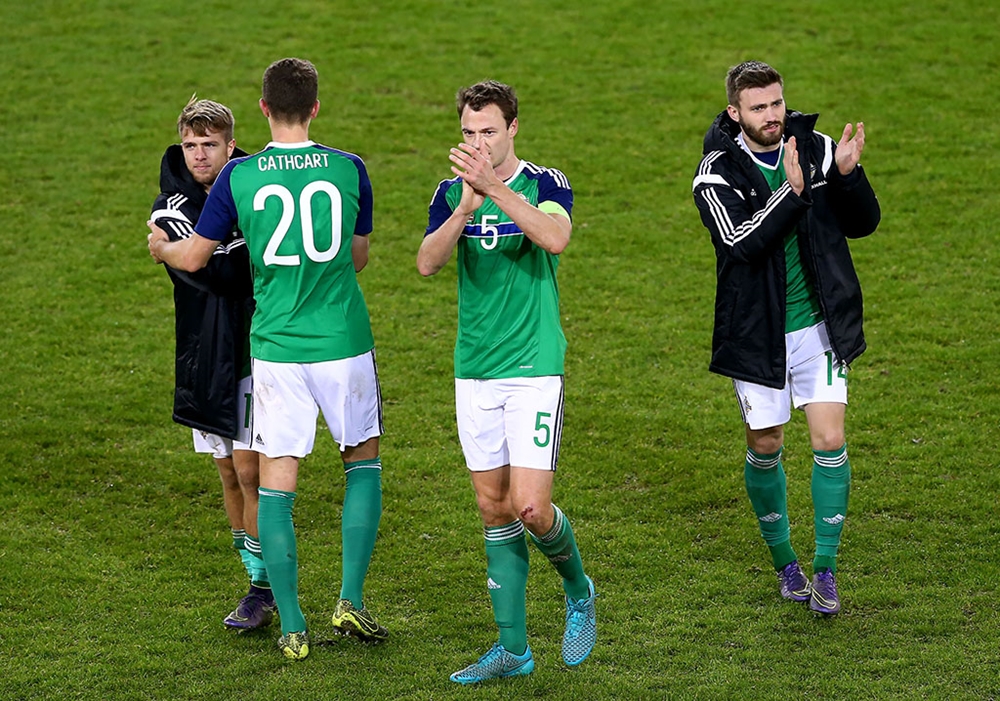 With international colleague Gareth McAuley unavailable because of a hamstring injury, Evans, who had missed the last two matches with a similar complaint, slotted comfortably into the centre of the Baggies defence producing a man-of-the-match performance against the Toffees.

West Brom boss Tony Pulis also welcomed back Chris Brunt, who came off the bench for the last 33 minutes after missing the last month with a calf strain.

There were a trio of Northern Ireland players on first team duty for Accrington Stanley in their 4-1 victory over Crawley Town in League Two and all of them had quite an eventful afternoon!

Firstly striker Billy Kee, who has ten under-21 caps to his name, tapped home a first half equaliser to chalk up his eleventh goal of the season.

Then midway through the second period Newry-born Shay McCartan was dismissed for a bad tackle which led to a 23-man melee in which saw a third Northern Ireland player, Jason Mooney, who was on the substitutes bench, also receive a red card after running onto the pitch and getting involved in proceedings.

“On reflection it was a bad challenge by Shay McCartan,” admitted Stanley boss John Coleman, “it wasn’t malicious and he didn’t mean it but it looked bad.

“I can understand their players feeling aggrieved but there were punches being thrown all over the place and not by our players and there could have been a few more sending’s-off.

“Jason shouldn’t be on the pitch,” he added, “but he saw one of his team-mates getting kicked and he reacted to it.”

The only other Northern Ireland player to get his name on the scoresheet was one time under-21 midfielder Bryan Gilfillan who fired home a 57th minute penalty for Annan Athletic who drew 3-3 at home to Montrose in Scottish League Two.

Elsewhere, injury stricken striker Martin Paterson made his first appearance for Blackpool since 19th December when he came on as a late substitute in the Tangerines 3-2 home defeat to Shrewsbury Town,

Finally in League Two in England, 18 year-old right-back Nathan Kerr made Stevenage’s first team squad for the first time  when he was named a substitute as they collected a much needed three points at home to Cambridge United.