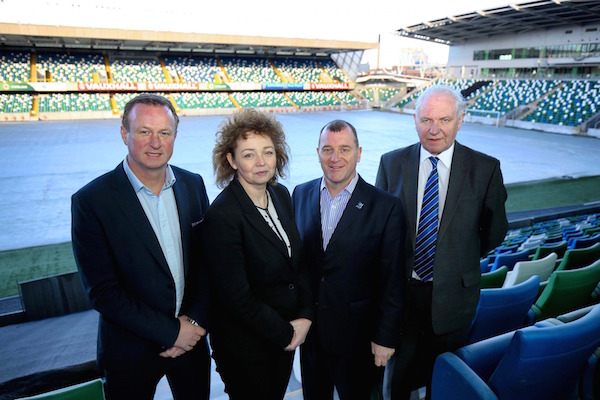 The new offices are an integral part of the £32.25m Windsor Park re-development, £28.25m of which has been funded by DCAL under the NI Executive’s Regional Stadium Programme.

Work on the Regional Stadium Programme element of the re-development will be concluded this summer with the completion of the new Education and Heritage Centre which is also located in the East Stand.  Work is ongoing on the re-instatement of the West Stand and this is due for completion in
September 2016, ahead of the commencement of the World Cup qualifying campaign.

Speaking during her visit to the new headquarters the Minister said;

“I am pleased to visit these magnificent new state of the art premises and to view ongoing progress on the reconstruction of Windsor Park. It is a tremendous asset to the Irish Football Association to consolidate their offices under one roof and on one site and I wish them every success moving forward.

While at the stadium, the Minister also used the opportunity to view progress on the overall development.

She said; “There has been a major transformation of Windsor Park since I cut the first sod for the redevelopment in May 2014. With the greatly enhanced facilities and increased capacity more and more patrons will be able to enjoy the on-field action in excellent surroundings.

“The construction of this stadium has also provided the opportunity, through the use of social clauses on government capital projects, for those who are long term unemployed and apprentices to gain employment and experience.

“I commend the IFA, the main contractors O’Hare and McGovern and all the sub contractors who have helped get the stadium to this stage of readiness and I am looking forward to the completion of work and the official opening of the redeveloped ground later this year.”