‘The Underdogs Tag Will Really Suit Us’ 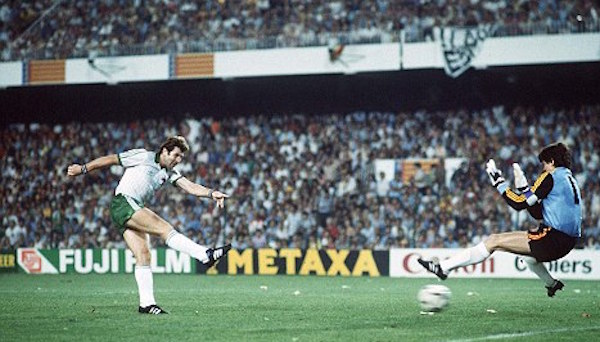 The former international striker believes the tag of underdogs will suit us at the European Championship finals in France.

“We are being seen as underdogs and that’s what we want to be. In theory we are the weakest of the four teams in our group, but there’s a good spirit in the team and I see a lot of similarities with what we had in 1982 and 1986. I think we can surprise a few people,” he said.

The striker turned TV pundit, who won 63 caps for his country, is urging the Northern Ireland players to enjoy the tournament and he believes the celebrations and euphoria following qualification for UEFA EURO 2016 will leave them wanting more of the same.

That was certainly his experience after a “brilliant night” at Windsor Park in November 1981 when Northern Ireland sealed qualification for the 1982 World Cup in Spain with a 1-0 win against Israel.

Gerry scored the only goal that night in front of 40,000 fans.

He also remembers there being lots of excitement in the run-up to Espana ’82. “We started talking about it at the start of the year and it built from there,” he revealed.

On the eve of the tournament Northern Ireland were given little chance of progressing out of a group which contained the host nation, a strong Yugoslavia side and Honduras.

“The fact we were underdogs meant no pressure, but we expected to do well ourselves,” he revealed.

A 0-0 draw against the Yugoslavs in the opening game was followed by another draw, 1-1 against Honduras.

At that stage Northern Ireland were being written off.

However, then manager Billy Bingham had taken his team to watch Spain in their opening group fixture against Honduras, which also ended 1-1.

“We discovered Spain were not as good as we thought they were. Just before we played them Martin O’Neill (who captained the side) said they would come at us for the first 20 minutes and if we weathered the storm we would get chances. 1-0 was always the plan because we could defend a lead,” he revealed.

And, of course, that’s the way the game in Valencia panned out, albeit with a few twists along the way, not least a dubious red card for Mal Donaghy.

Gerry, of course, scored the only goal of a game that was voted Northern Ireland’s Greatest Ever Sporting Moment by Belfast Telegraph readers.

He explained his goal and the scenes of jubilation at the final whistle are still vivid in his memory banks after all these years.

Billy Hamilton whipped a cross into the Spanish box which was pushed out by their keeper Luis Arconada towards Gerry… “I remember the ball coming to me and thinking that I should hit it hard and keep it low. I also remember the stadium going eerily quiet after I scored apart from 500 to 600 of our fans going crazy. There were also crazy scenes at the final whistle.”

The party afterwards was pretty legendary, too. The beer flowed.

“The late Jimmy Hill had interviewed me before the game and when we arrived back at the team hotel he was waiting with a tray of champagne. That set the tone.”

Gerry revealed the magnitude of their victory against the host nation really hit home when Billy Bingham showed the players a wall in the hotel which was plastered with telegrams of congratulations from all around the world.

“I remember calling home the next day and being told that there were street parties. The Troubles were bad at the time but people had come together and they were happy.”

The next game was against Austria and he recollects the team really struggled with the heat. It was a 4pm kick-off in Madrid and the temperature gauge read 112 degrees on the pitch. “It was absolutely boiling. I had a cold shower at half-time in an attempt to cool down,” he said.

Billy Hamilton weighed in with two goals against the Austrians as the game ended all square.

Northern Ireland then faced France to decide who would progress to the next round. Gerry scored against the French, but Northern Ireland exited the tournament following a 4-1 defeat.

Several of the players who starred in the ’82 World Cup also made it to Mexico four years later.

Despite the team undertaking training at altitude in Albuquerque, New Mexico, for a few weeks prior to the tournament, Gerry firmly believes it was the altitude which beat them in the summer of ’86. He said the team were really fit, as they had been in Spain thanks to Billy Bingham’s tough training regime, but they just could not cope with the altitude.

Norman Whiteside scored against Algeria in their first group game, which ended 1-1. It was followed by a 2-1 defeat against Spain – Colin Clarke scored the goal – before Gerry won his 63rd and final cap after coming on as a sub in the final group game against Brazil.

Gerry made only one appearance at his second World Cup but he certainly went out on a high. “Playing against the team that stands out more than any other nation when it comes to World Cups, well, you can’t get better than that.”

So now to France 2016 where Gerry believes we can prevail.

He said: “The qualification was fantastic and the boys have done really well. I think it’s important to get something from the Poland and Ukraine games and then it’s Germany. We can definitely cause an upset. Michael (O’Neill) will be well prepared.”