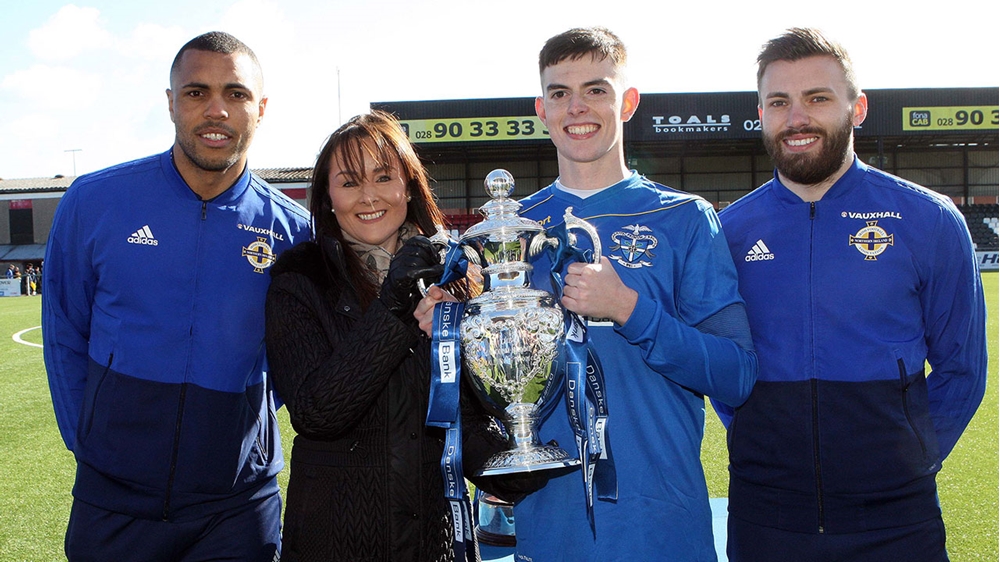 Substitute Scott Rice slotted in a free-kick with two minutes to go to secure the Danske Bank NISFA trophy for the Derry-Londonderry school at Seaview this afternoon.

Northern Ireland internationals Stuart Dallas and Josh Magennis were on hand with Danske Bank’s Aisling Press to present the medals and the cup to St Columb’s captain Nathan Harkin.

St Columb’s - losing finalists last year - applied the early pressure but had created little until they opened the scoring on 12 minutes. Ryan Doran managed to rob a defender and jink his way to the by-line before pulling the ball back to Cian McGarvey and he slotted it into the net from six yards.

St Patrick’s, known as the Red High in Downpatrick and surrounding areas, battled hard to get back into it.

However, it was St Columb’s who had the next decent chance. In the 34th minute midfielder Callum Doherty fired a free-kick just inches past the upright.

Six minutes later, on the stroke of half-time, Red High levelled the scores when Coalan Conlon flicked a header into Callum Shields’ path and the striker slotted the ball home under advancing keeper Conan Doherty.

Early in the second half Red High’s Caolan Conlon fired in a corner which the St Columb’s keeper did well to palm away.

Then St Columb’s midfielder Callum Doherty cleverly slipped past a couple of St Patrick’s defenders but his scuffed shot from the edge of the area drifted wide.

Lively winger McGarvey began to make his presence felt with a couple of dynamic runs and the Red High defenders had to work hard to keep him at bay.

St Columb’s began to play some silky football across the park but the Red High stood firm with Conor Breen, Ruairi O’Hare and Ronan Lavery in particular putting in some excellent tackles. And captain and keeper Fintan Canavan raced off his line to clear on the edge of the box as Ryan Tabbit was set to get a shot away.

Deep into injury time St Columb’s were more than a little aggrieved by ref Jamie Robinson’s decision to award a free-kick for a rash tackle on super sub Rice out wide when the ball broke to a couple of attackers in the area. If the advantage had been played it could well have resulted in a more positive outcome for the Derry boys.

St Columb’s, who had enjoyed the bulk of the possession in the 80 minutes, began extra time on the front foot and Lavery kept them out again with a fine last ditch tackle.

With three minutes to go Canavan came to collect a long ball but stepped inches outside the area. The ref produced a yellow card for the Red High captain and awarded a free-kick.

Rice stepped up for St Columb’s and his low drive evaded the wall and Canavan’s fingertips to nestle in the bottom corner. And it was enough to earn the Derry school a 2-1 victory.