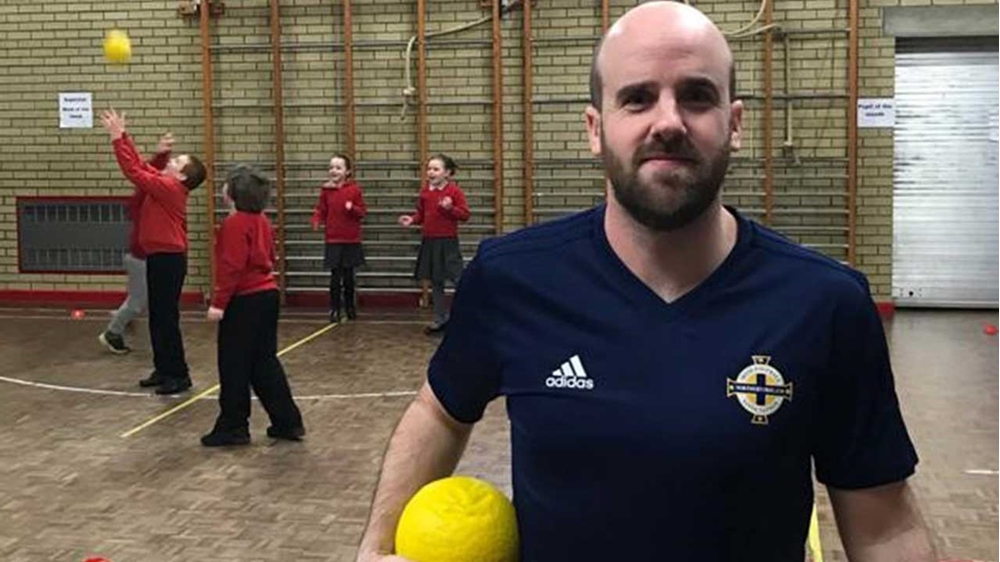 How long have you worked for the IFA/IFA Foundation?

I initially started working for the IFA on a casual basis by getting involved with game and skill centres. In January 2012 I started a maternity cover in the Ballymoney area and in the summer of that year I was made permanent.

What’s your role within the Curriculum Sports Programme?

I deliver fun and engaging sessions that offer children the chance to develop their fundamental movement skills. It is also aimed at encouraging children to become involved in and enjoy sport while embracing a healthier lifestyle. Another vital part of my role is to help develop and support teachers with delivery of sessions.

Working in the school environment means I follow a timetable through the week. Depending on the school I can find myself coaching between five and seven sessions in a day. This is before racing off to coach at an afterschool, the player development programme or potentially delivering coach education. The enjoyable part of my job is that no two sessions are ever the same. This is why I love coaching in schools as every class and school has different personalities and every day I have different challenges to overcome.

I love working in schools and representing the IFA. When I was in school I would have loved to have had a programme like this running. In our job we often get to be the highlight of a child’s week in school. It’s amazing how excited children get when they see you and that positive reaction allows for really enjoyable sessions.

I also have the opportunity to work with and learn from incredible colleagues within the association. You can’t help but develop and improve when working with people who are so passionate and knowledgeable about the game. I know that I am in a privileged position and it is something I try and remind myself of as often as I can.

Are you involved in football beyond your role with the association? (i.e. do you coach at a club?)

At the moment I am not coaching outside of the association. I have taken a step back since getting married and having my daughter Ruby Mae. Things can be hectic for myself and my wife Fiona with work and other things going on but we try to make sure we are able to spend time with our daughter in the evenings. I also wanted to keep enjoying playing football while the legs will allow me. This means getting to five-a-side as often as I can and training with my friend’s football team. I was a coach with Cliftonville for a few, but very enjoyable, years. While not rushing into anything I do see myself returning to coach at the Reds in the future.

Football has always been my focus. When not playing I am watching and reading about it. I do enjoy other sports. My grandfather was a huge boxing fan and through him I developed an interest in that. He travelled all over to watch it and was very close to Barry McGuigan, which was why I was so chuffed to meet and get a picture with Barry in one of my schools. I am also a huge fan of UFC but my interest in both sports doesn’t go any further than watching. I can enjoy most sports, however football will always come first.

I was fortunate enough to grow up as a Man United fan (though my dad was a Spurs supporter) during the Fergie era. I grew up watching amazing players like Keane, Cantona and Scholes. You can’t help but love the game when watching players like that. Back then I didn’t have Sky Sports so I was also a huge fan of Italian football. I still love watching highlights now of the likes of Baggio, Batistuta, Zidane and Ronaldo (the real one). I was never without a ball back then, playing whenever I had the chance, be it with friends, at football clubs or in my driveway. The garage door still has the massive dents from my shooting.

Why did you become a coach?

I became a football coach because of a six-week placement with the IFA as part of my university course. Before then I wasn’t sure what I wanted to do apart from be involved in sport in some way. Through the placement I fell in love with coaching and got to see the role of the IFA in delivering different programmes in the community. It’s because of my own experience that I would recommend anyone with an interest in football to try and get involved with the IFA.

After leaving school I achieved a HND in Leisure Management (Sport and Recreation). This then led to me attending Stranmillis University College where I achieved a BSc in Health and Leisure Studies. Since gaining my Level 1 (while on placement with the IFA) I have gone on to achieve my UEFA B Licence and I hope to complete my A Licence.

It’s hard to choose any one person as being an inspiration to me. I’ve always had strong role models in the IFA. I’ve worked under three great GDOs (Grassroots Development Officers) in Sean Paul Murray, Stevie Livingston and the late, great Wes Gregg. I’ve always been able to pick up the phone and get advice and guidance. That’s the same with most of my colleagues in the IFA, from my boss Jonathan Michael to my fellow primary school coaches. For me that’s more important than being inspired. I love working as part of a team and having that support network.

Having thought long and hard about this, the best I can come up with is that I once appeared on Live and Kicking when I was a kid. It was a children’s TV show on a Saturday morning and, sadly, it appears to be the only thing interesting about me.