Dunne shines as U18s begin Shield campaign with a draw 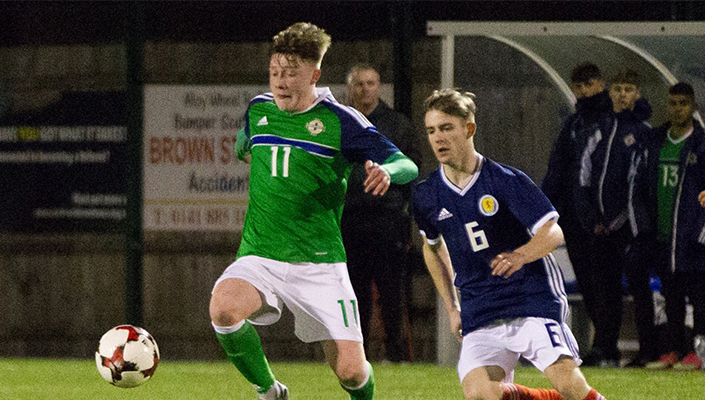 The Northern Ireland Under-18 Schoolboys’ team got their 2018 Centenary Shield campaign up and running with a hard-fought scoreless draw against Scotland.

The U18s, who are current joint-holders of the trophy with England, had to dig deep at New Western Park in Renfrew over the weekend to come away with a point. And goalkeeper Declan Dunne was immense for Northern Ireland.

Matches between the two countries at this level are always tight affairs so it was unsurprising that the opening 25 minutes were evenly contested.

The only two strikes on goal during that period came from Scotland’s Daniel MacKay. Firstly, he pulled a right foot shot across the face of goal and then his left foot drive was comfortably held by Dunne.

In the latter stages of the first half Northern Ireland carved out a couple of opportunities.

Andrew Scott evaded a few challenges in midfield but shot past the post and then Caoimhin McConnell wriggled infield before sending a left foot shot over the bar.

On the stroke of half-time Scotland almost got in down the right but Dunne rushed from his goal to again thwart the attack.

Just after the break Dunne produced a stunning save to keep the scores level. MacKay got on the end of a clearance from a corner and fired in a wicked dipping shot which was spectacularly touched over by the keeper.

MacKay then came close again. His deflected shot spun past Dunne but nestled on the roof of the net.

On the hour mark only a last ditch tackle from Scotland’s Cameron Clark prevented Aaron McGurk from getting on the scoresheet for Northern Ireland.

Dunne then gathered well following another Scottish raid before, with 15 minutes to go, Northern Ireland had possibly their best opportunity of the game. A dangerous cross from Aaron Donnelly on the left was nodded down by Jack O’Mahony towards substitute Pablo Andrade. Before Andrade could pounce, however, Scotland keeper Elliot Anderson managed to clutch the ball.

Scotland’s substitutes then combined to test the skills of Dunne. Harwood broke down the left before cutting infield. His shot was blocked by Caolan Coyle but the loose ball was fired goalwards by Scott and Dunne again saved superbly.

In the last two minutes Scotland carved out two more opportunities. Scott played a fine pass to MacKay, who looked as though he was through on goal, only to be denied by a fantastic interception by Adam McAleenan.

The lively Harwood then shot over following a crisp interchange of passes with Kemp. And it meant man of the match Dunne kept a clean sheet and Frankie Wilson’s side put their first point on the board in this year’s competition.

The U18 Schoolboys’ second game in the Centenary Shield is against Wales at Newry Showgrounds on Thursday (15 March, 3pm start) followed by a clash with the Republic of Ireland in Monaghan on 29 March. Their final game will be at home to England at Queen’s University Belfast’s Dub complex on 6 April.