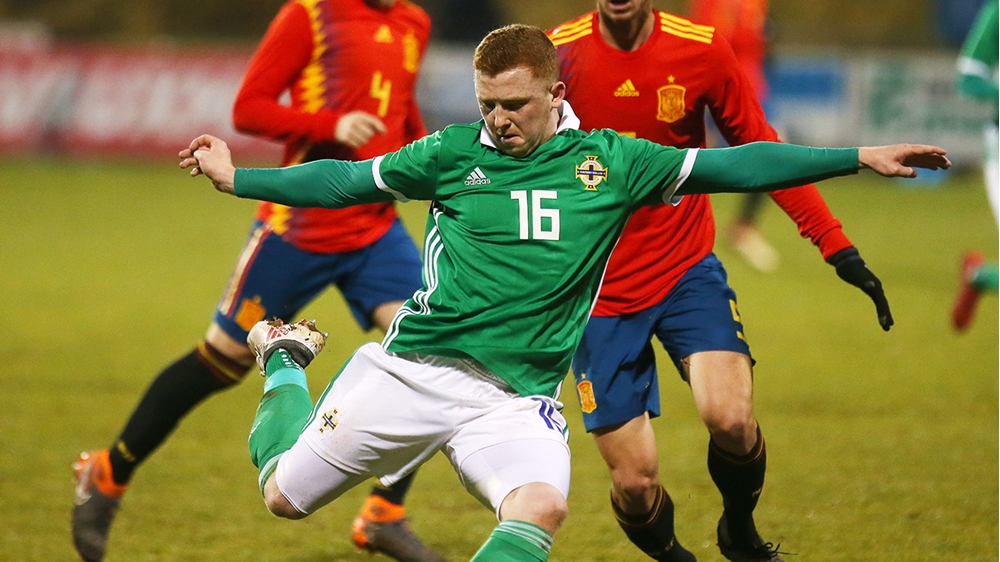 Spain’s young stars turned on the style to defeat Northern Ireland U21s 5-3 in Portadown this evening.

In front of a crowd of 2,309 at Shamrock Park the U21s gave a gutsy and energetic display but the Spanish, with a smattering of La Liga players in their ranks, made their obvious class count in the UEFA U21 Championship 2019 qualifier.

Spain remain top of Group 2 - with five wins out of five - thanks to a Borja Mayoral hat-trick and a brace from Mikel Oyarzabal.

Both sides started brightly, with the Spanish spraying the ball around effortlessly. And they opened the scoring on 15 minutes. Spanish captain Dani Ceballos produced a wonderful pass to Real Sociedad star Oyarzabal just inside the area and he neatly tucked the ball under the advancing Conor Mitchell into the net.

In the 22nd minute the lively Carlos Soler fired a shot into the side netting for the Spanish before Paul Smyth produced an inviting cross for the home side that was cleared and Shayne Lavery drilled in a low shot which was comfortably gathered by Antonio Sivera.

Then it was Spain’s turn to attack again and Mitchell did well to push away a Mayoral strike.

In the 30th minute a rash challenge by Fabian Ruiz Pena on Gavin Whyte inside the area saw the ref immediately point to the spot and Northern Ireland captain Liam Donnelly confidently stepped up to smash the ball into the bottom corner to make it 1-1.

There was a let-off for the home side on 39 minutes when Mayoral hammered the ball over the bar after losing his marker inside the area.

But as half-time approached Oyarzabal pounced to put the Spanish in front again. After a bit of trickery he neatly tucked the ball past Mitchell eight yards out.

However, there was still time for the boys in green to equalise. Liam Donnelly got on the end of a free-kick and controlled superbly before smashing the ball into the corner of the net from 10 yards.

Spain came flying out of the traps at the start of the second half and quickly took the lead again. The flying Soler fed the ball to Mayoral and the Real Madrid striker’s clever flick nestled in the corner of the net.

Gavin Whyte produced a lovely nutmeg inside the area before sending in an inviting cross which was eventually cleared by the Spanish defence.

Northern Ireland made it 3-3 on 68 minutes. Mark Sykes made a penetrating run into the area. His effort was snuffed out but Shayne Lavery picked up the loose ball, jinked past a defender and slammed it home at the near post. A super finish from the Everton man.

Whyte, who was having an excellent game, hobbled off moments later to be replaced by Ben Kennedy.

Mayoral then made it 4-3 to the visitors in the 75th minute. This time Oyarzabal turned provider, firing in a low cross which the striker smashed into the top corner from close range.

Minutes later Ryan Johnson set Lavery free down the left and he made a good run before firing a shot wide of the mark from just outside the area.

But Spain effectively secured all three points with 10 minutes to go when Mayoral completed his hat-trick. The Northern Ireland defence switched off and the striker was left unmarked at the back post to score with a close range header from a pinpoint delivery.