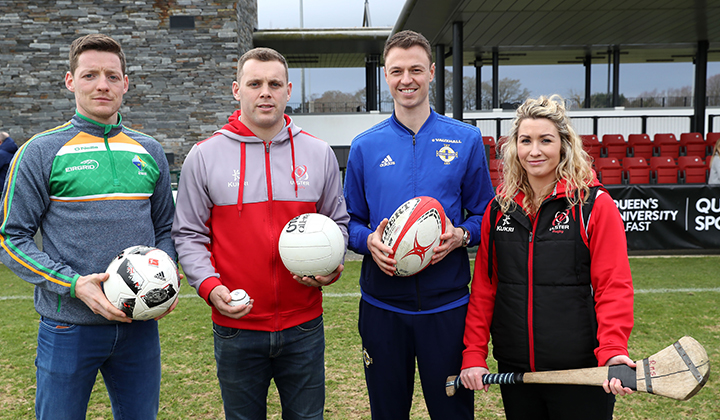 The Irish Football Association, Ulster GAA and Ulster Rugby today launched ‘Sport Uniting Communities’ an EU PEACE IV funded programme which aims to promote peace and reconciliation. The collaboration project between the three bodies hopes to reach 17,000 people of differing backgrounds, particularly across the political divide, with the aim of changing perceptions and building sustained relationships.

Research has shown that sport delivers its most positive impacts on behaviour when it incorporates integrated mentoring, training, volunteering and work experience programmes. Based on this research the project partners have designed a range of activities based on education, training, empowerment and leadership directed to volunteers and clubs.

On the day, players from the Northern Ireland Under 19 women’s team, Ulster Ladies Gaelic Football Colleges All-Star team, Ulster Rugby Team, Dungannon Team and Syrian Team had the opportunity to participate in a range of ‘Have a Go’ activities in each of the thr ee sports. These activities were delivered by Community Sport Development Officers from the three governing bodies whose responsibility it will be to deliver the programme across the province. Elite players from football, GAA and Rugby passed on their expertise and shared stories of their involvement in other codes.

The Sport Uniting Communities programme is delivered across the province of Ulster with support from the EU PEACE IV programme and managed by the Special EU Programmes Body.

Ulster GAA Vice President, Oliver Galligan, said:
‘‘The multi-sport partnership between the three major sporting bodies in Ulster has evolved and strengthened over the last number of years. By using sport to promote contact between individuals from diverse backgrounds, the partnership has helped to break down barriers within communities. The "Sport Uniting Communities" project further enhances this work enabling meaningful, purposeful and sustained contact between communities through sport. Ulster GAA is extremely committed to being a key player in this exciting project.’’

Irish FA President, David J Martin, said:
“Sport has the power to bring people together. We have seen the positive effect that football has on communities across Northern Ireland, both in terms of the health benefits of playing the game as well as the shared experience of competing, spectating or volunteering. I am therefore delighted that the Irish FA is working with both Ulster GAA and Ulster Rugby on this ambitious and far-reaching project. With the three sports working together I have no doubt that ‘Sport Uniting Communities’ will make a lasting impact on Northern Ireland and will make a positive and enduring difference to people across the country.”

IRFU Ulster Branch President, Graffin Parke, added:
“Ulster Rugby is delighted to be involved in this fantastic initiative along with our partners in Ulster GAA and the Irish FA. Rugby, and indeed sport in general, offers so much more to people than just the 70, 80 or 90 minutes on the pitch, and through this programme we have the opportunity to deliver these sporting and societal benefits to an even greater number of people right across the Province. We look forward to working together over the next four years, using sport as the medium to enhance relations and promote positive change throughout our communities.”

Welcoming the EU PEACE IV funded project Gina McIntyre, CEO of the Special EU Programmes Body (SEUPB), said: “Using a shared interest in sport to break down barriers, this project will overcome prejudice and promote positive relations between people of different backgrounds and cultures. It represents an experienced cross-border partnership that will reach out to many of the more marginalised sections of our society to help promote inclusivity.”

Match-funding for the project has been provided by the Executive Office in Northern Ireland and the Department of Rural and Community Development in Ireland.