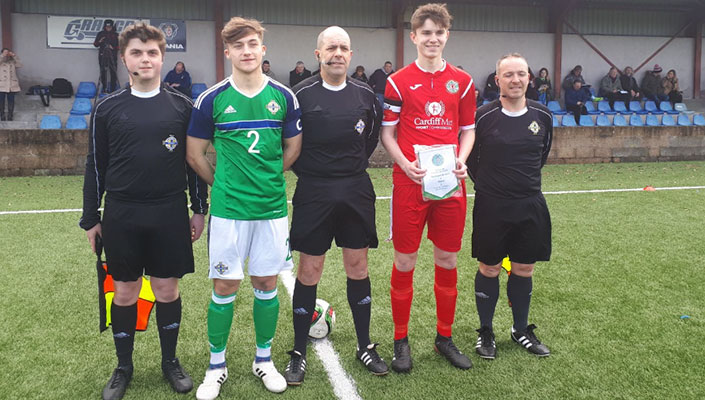 The Northern Ireland Under-18 Schoolboys’ team had to settle for another draw in their second 2018 Centenary Shield game.

After a hard-fought scoreless draw with Scotland in Renfrew last week, Frankie Wilson’s side were hoping to go one better against Wales at home.

It was a frustrating day for the U18s, however. They opened the scoring and hit the woodwork twice in the game but could only manage a 1-1 draw against dogged opponents.

There was a late venue change for yesterday’s international encounter. Newry Showgrounds was waterlogged so Armagh City FC’s Holm Park was chosen to host the match.

It was a cagey affair to start with and there was little goalmouth action until midway through the first half. Wales striker Oisan Jones was put through for a one on one with Northern Ireland goalkeeper Declan Dunne - but Dunne stood up well to make the save.

The first chance for the home side should have brought the opening goal. The ball fell to Caoimhin McConnell inside the box and he unleashed a fine shot but his effort hit the outside of the post.

Northern Ireland opened the scoring on the stroke of half-time, however, when Andy Scott weaved his way down the left and fired in a shot. The Welsh keeper managed to push the ball away but McConnell was on hand to blast the loose ball into the Welsh net.

Wales produced the better football in the second half and found themselves level when Jones created space inside the box on the right and slammed the ball past Dunne at the near post.

Both teams pushed for a winner in the closing stages of the game and the home side almost snatched the win when substitute Aaron McGurk produced a cracking low drive. It beat the keeper but hit the bottom of the post and the danger was cleared.

The U18 Schoolboys’ third game in the Centenary Shield is against Republic of Ireland in Monaghan on 29 March. Their final game will be at home to England at Queen’s University Belfast’s Dub complex on 6 April.