U21s in buoyant mood despite defeat to Spain 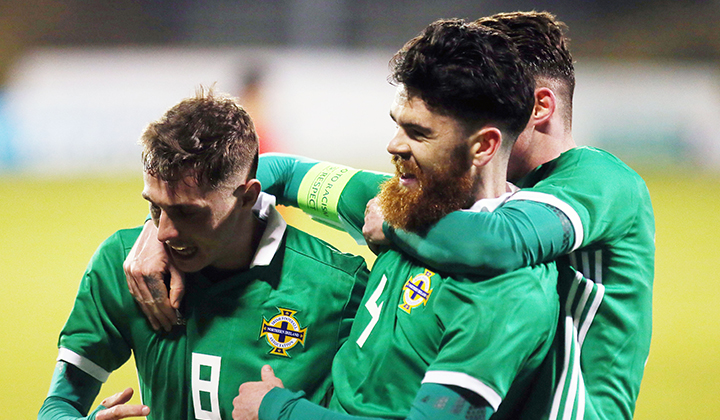 Northern Ireland’s U21s will be going all out for victory in their game against Iceland in Coleraine this evening.

Ian Baraclough’s squad are determined to cement second spot in UEFA U21 Championship qualifying group 2 – and retain an outside chance of reaching a play-off for a spot at the U21 Euros next year.

Despite losing 5-3 to runaway group leaders Spain in Portadown on Thursday, both the boss and the players took lots of positives from the game.

For starters they scored three times against a classy Spanish side peppered with La Liga stars. They also produced some neat football and carved out several chances.

And they know they need a win against Iceland to put some daylight between themselves and their nearest rivals.

QPR winger Paul Smyth, who scored on his senior international debut against South Korea on Saturday, will be missing from Ian Baraclough’s squad for the game in Coleraine due to suspension.

However, the exciting Everton striker Shayne Lavery, who along with Smyth was called up to the senior squad by Michael O’Neill for the game against the South Koreans but did not get game time, will be in action this evening at The Showgrounds (7.30 start, free admission).

Crusaders winger Gavin Whyte, who had a great game against the Spanish, is also expected to be available. He limped off the pitch in Portadown due to cramp but has made a full recovery

Coleraine FC supporters will be hoping Bannsiders midfielder Ciaron Harkin and striker Jamie McGonigle will get some game time on home soil. Both were unused subs against Spain.

However, it looks likely Ian Baraclough’s starting 11 will be along similar lines to the one that began the game against Spain.