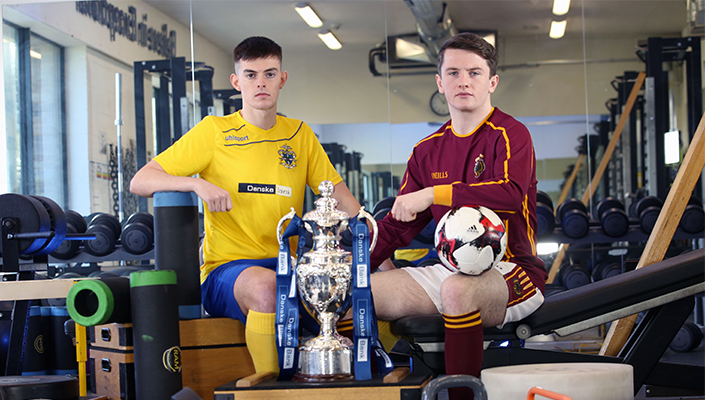 St Columb's College were losing finalists last year and will be aiming to go one better as they come up against St Patrick's Grammar School who are in their first football final since 2001.

"I won it in fifth year and it was incredible. Losing in the final last year was hard to take so there is a big emphasis on this year."

The captain of St Patrick's Grammar School Downpatrick, Fintan Canavan, would love to get his hands on the trophy on Monday. He said: "I think it would be one of the greatest achievements of my football career and life. To play with the lads that I have grown up with the last seven years, there would be no better feeling and I hope we can do it.

"Hopefully we can become local heroes at school and in the town and surrounding area. That's the aim."

To find out more from the pair ahead of the final on Monday 19 March, which kicks off at 12pm, watch the video above.

Before the Danske Bank final Crusaders FC's Seaview stadium will be hosting the Belfast U16 Schools' Cup final between Edmund Rice College and De La Salle College (10am kick-off).

"It will be a fantastic occasion for all schools involved in our finals on Monday. I would like to thank the hard work of all teachers and pupils to getting to this stage in both our Belfast and Northern Ireland competitions and would like all players to enjoy the day and represent your schools with pride,” said Northern Ireland Schools' FA chairman Bob Nesbitt.

Entrance to the games will be £4 for adults and £2 for children.