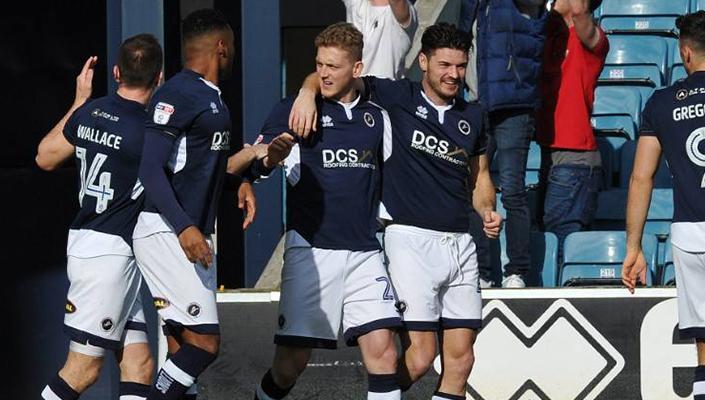 Midfielder George Saville scored inside the first minute for the second successive match to give Millwall all three points against his old club Brentford at the weekend.

The 24-year-old struck the only goal of the game after just 51 seconds, bizarrely exactly the same time it took him to find the net against Hull City in midweek, to take the Lion’s unbeaten sequence to eleven games.

“We’re on a fantastic run at the minute,” said Saville, who made his Northern Ireland debut against Germany last October. “The main thing for us this season was to get to 50 points.

“We’ve done that and we can now go out and enjoy ourselves and see where it takes us.”

Saville spent a season on-loan at Brentford and admitted he enjoyed getting on the scoresheet against his former employers.

“I was at Brentford for a year – the promotion season (2013-14),” added Saville. “I have fond memories of it and had a fantastic time there.

“But I’m a Millwall player now. I’ve been back to Griffin Park three or four times and been given stick, that’s just part of football.

“To get one over on them was great for me, but more importantly for Millwall to get three points.”

Meanwhile, Will Grigg was among the scorers as Wigan Athletic could only draw 3-3 at home to fellow play-off challengers Scunthorpe United on Saturday.

It was the Solihull-born striker’s 18th of an impressive campaign after he was officially credited by the Football League of getting Wigan’s goal in the 2-2 draw with Blackburn Rovers last weekend.

In League Two, Billy Kee’s injury time winner at Luton Town sent Accrington Stanley to the top of the table following the 2-1 success at Kenilworth Road.

Stanley boss John Coleman heaped praise on his team and the former Leicester City trainee who has now scored a magnificent 22 goals in 42 appearances for the Lancashire outfit this season.

Coleman said: “In the last minute we got the ball down and passed it. Where anybody else might have smashed the ball into the box or took a chance, we were clever enough to pass it to Billy.

“If you back off the league’s leading goalscorer you’re inviting trouble - they did and we wouldn’t want anybody else in that position.

“Billy has got an unbelievable shot from very little back-lift and as soon as it left his foot it was in and I knew it was in, it was shades of Brian Kidd and Alex Ferguson.”

In the National League, there were goals too for Josh McQuoid, who hit a consolation for Aldershot in their 7-1 defeat at AFC Fylde and former under-21 midfielder Paddy McLaughlin who scored Gateshead’s sixth in a 7-1 rout of Maidenhead United.

On the injury front Jonny Evans missed West Brom’s 4-1 Premier League defeat to Leicester City due to illness while Steven Davis’ hamstring complaint again kept him out of the Southampton side that lost at Newcastle United.

Finally, Burton Albion striker Liam Boyce was substituted early in the second-half of the scoreless draw with Bristol City, however, manager Nigel Clough is hoping the former Cliftonville man will be available for tomorrow night’s trip to Sheffield United.

“Liam Boyce’s ankle is quite badly swollen after a tackle,” said Clough. “We’re not sure but hopefully he’ll be alright for Tuesday.”