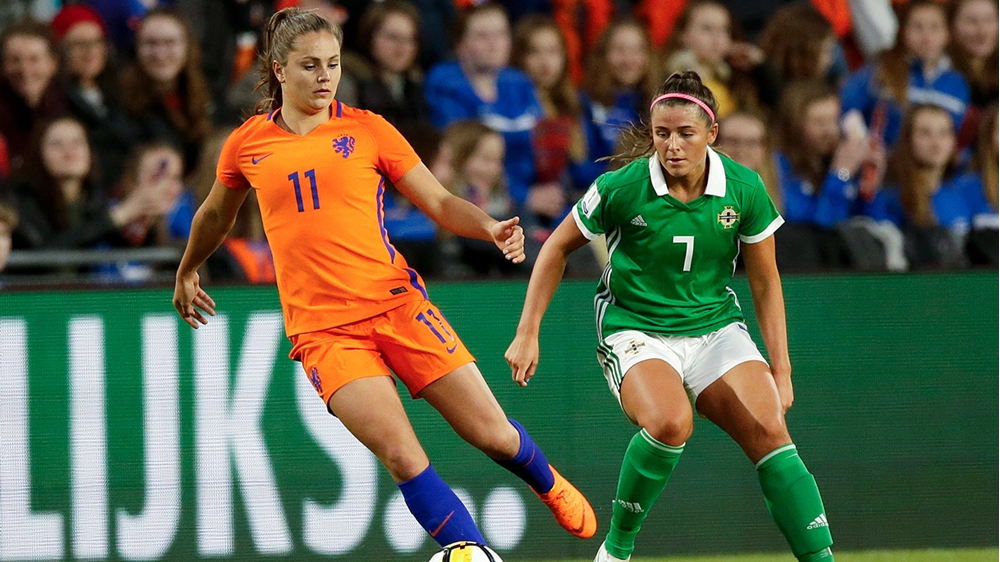 It will be the classic David v Goliath scenario when Northern Ireland take on the Netherlands in Portadown on Friday evening (8 June).

The Dutch, ranked seventh in the world, are currently among the giants of the women’s game after winning Women’s Euro 2017 on home soil.

And most of the team who secured the European Championship title following a thrilling 4-2 win over Denmark in the final last summer will be at Shamrock Park (7.45 kick-off, free entry) to face Alfie Wylie’s charges in a World Cup qualifier.

Northern Ireland, who are ranked 56th in the world, have struggled in FIFA Women’s World Cup 2019 Group 3 so far, with only one win under their belts, and they will need a miracle to get any sort of result against their illustrious opponents.

Barcelona striker Lieke Martens, who was named as the best female player on the planet by FIFA last October, heads an all-star list of players in the Netherlands squad.

Their regular line-up also features the remarkable Sherida Spitse, who plays for Valerenga in Norway. The 28-year-old midfielder has already won 148 caps for her country and weighed in with 27 goals, including two in the 7-0 win against Northern Ireland in front of more than 30,000 fans in Eindhoven back in April.

And with other players who represent the likes of Bayern Munich, Ajax, Manchester City, Arsenal and Everton in their ranks, it is no wonder that the Dutch are clear favourites to win the game against the girls in green.

Alfie Wylie, however, is hoping his players will rise to the occasion against the Netherlands, who are unbeaten in the World Cup qualifiers to date, their only blip in their five games being a home draw against the Republic of Ireland. They have scored 15 times and have yet to concede a goal.

It will be the first time that a senior Northern Ireland women’s team have played reigning champions at home in a competitive game – and the boss is hoping that will be a motivating factor for his team.

“We would hope that the opportunity to be history makers in front of our own loyal supporters will have been a major factor in everything that the girls have done in preparing for this game,” he said.

Wylie acknowledges it will be “a very difficult match” for his side but he is hoping his experienced players, including defenders Julie Nelson (who is expected to win her 98th cap at Shamrock Park) and Ashley Hutton, captain Marissa Callaghan and the attack-minded Rachel Furness and Kirsty McGuinness, will carry the younger members of the team to a famous result.