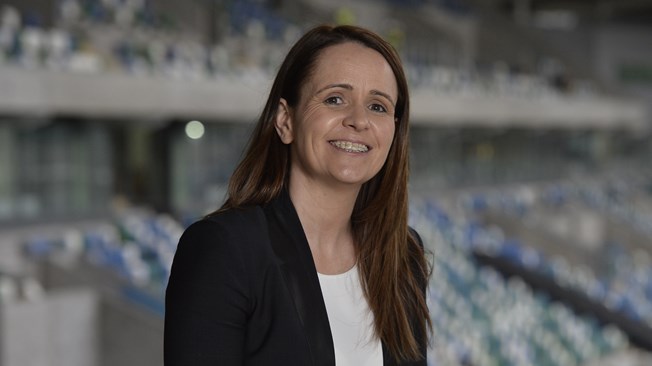 Former Northern Ireland captain, Sara Booth, has been awarded an MBE in the Queen’s Birthday Honours List for services to women’s football.

Sara was Tournament Director for the UEFA Women’s Under-19 Championship which was staged in Northern Ireland last summer.

The tournament saw record attendances as well as large TV audiences and was regarded as successful both in how it was staged and also how it helped inspire a generation of young girls and boys in Northern Ireland to take up the game.

Sara represented Northern Ireland for 15 years as a player. She won 32 caps in total for her country and spent four years as captain of the national side. Before delivering the UEFA Women’s Under-19 Championship she worked as the Irish FA’s Women’s Domestic Football Manager for just over a decade.

She left the Irish FA in January 2018 and is now Head of Women’s Football Competitions at world football’s governing body FIFA.

Irish FA Chief Executive, Patrick Nelson, said, ‘We are delighted that Sara’s contribution to the development of women’s football in Northern Ireland has been recognised in this way. She is passionate about seeing women given the same opportunities as men to play and enjoy our game and she is richly deserving of this award.’