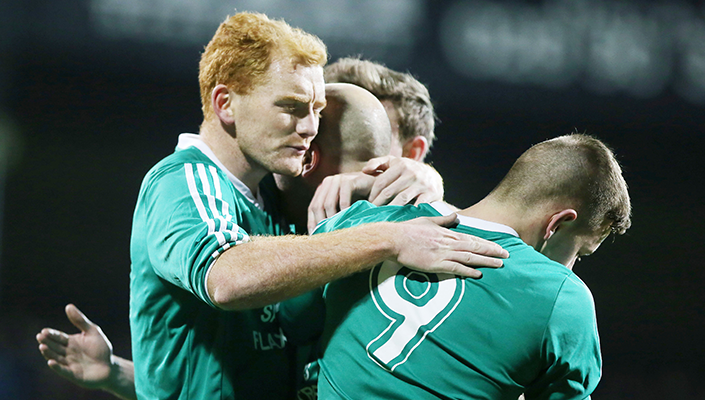 From a starting field of 113 clubs the Irish FA Intermediate Cup has been whittled down to the last 16 - and that number will be reduced further after tomorrow’s fourth round games.

The tie of the round sees Limavady United host Crumlin Star at the Showgrounds.

The Roesiders are well placed to push for the Premier Intermediate League title, sitting third four points behind leaders Donegal Celtic, but crucially with a couple of games in hand.

Paul Owens' side had been enjoying a rich vein of form of late only to suffer a somewhat uncharacteristic defeat against Dundela last Saturday in a game marred by a serious injury to defender Bryan McClelland.

United will be looking to the firepower of Robbie Hume to help book a place in the last eight. The former Institute man has 16 league goals to his credit already this season and he shows no sign of letting up.

But they will have to be wary of the threat posed by Crumlin Star, conquerors of Newry City in the last round.

They are undefeated since the end of November, winning their last eight games on the bounce and, like their hosts on Saturday, are handily placed in their league - the NAFL Premier - with games in hand over their fellow title hopefuls.

The last side to defeat Star, Linfield Swifts, are in action away to Bangor… only they're not because the Steel & Sons Cup winners and Premiership Development League leaders play their home games at the Seasiders' ground.

Not that home advantage or otherwise matters a jot to the 'wee' Blues. Alan Dornan's side have been almost invincible this season, with a single league defeat back in November being the only blot on their copybook.

Bangor, by contrast, have had a much more unsettled campaign. Struggling at the wrong end of the Premier Intermediate League, it's only their progress in the Intermediate Cup that has brought any sort of cheer to the North Down faithful.

Their task tomorrow won't be made any easier with the loss of Brett Widdowson, Dwaine Beattie and Jordan Lucas through suspension on top of injuries to Gareth Beattie, Barry Walsh and Ben Mulgrew.

Of the two Premier Intermediate League sides still left in the competition leaders Donegal Celtic make the journey to the North-West to face Newtowne and Newington travel to Rathfriland.

Also on the road are a couple of Danske Bank Premiership development squads. Carrick Rangers Reserves are in Mid-Ulster to tackle Hanover, while Cliftonville Olympic face Maiden City at the Templemore Sports Complex.

Elsewhere, high scoring Ards Rangers – they have an Intermediate Cup goal average of over five per game this season - will be hoping for more of the same away to Sirocco Works. Finally, Portstewart head to Inverary Avenue to take on East Belfast in what promises to be a tight affair.