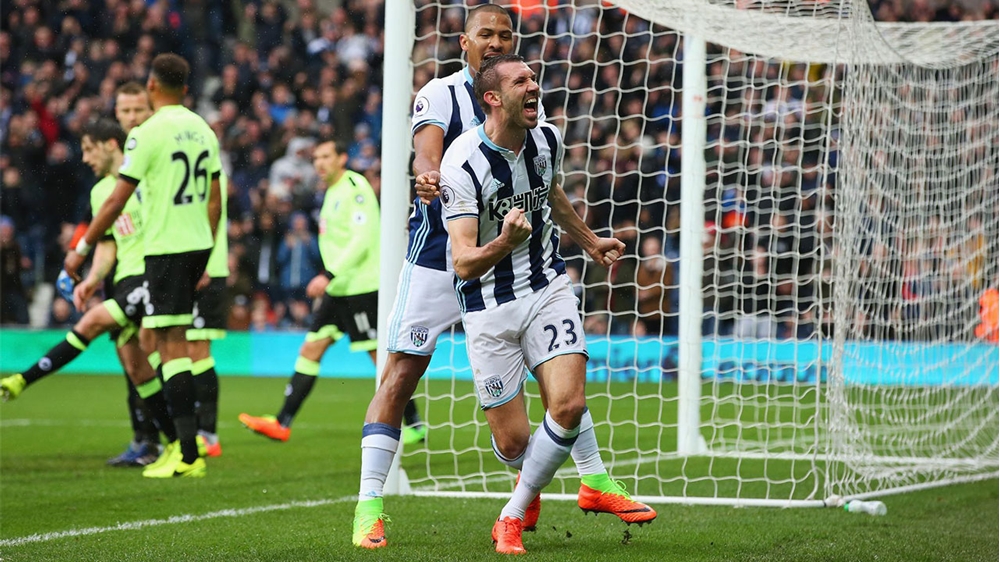 Gareth McAuley celebrated his 500th appearance in English football by scoring the winner in West Bromwich Albion’s 2-1 home success over Bournemouth at the weekend.

The 37-year-old defender has now scored a remarkable seven goals for the Baggies this season, making him joint top scorer at the Premier League club alongside Jose Salomon Rondon, but he is not sure exactly why he has been so prolific in front of goal this term.

“People are asking me why,” said McAuley. “I can only think it’s partly because of the new rules, where people can’t hold you and wrestle you and you can get a move into the box.

Saturday’s win over Bournemouth saw Tony Pulis’ side reach their pre-season target of 40 points and McAuley now believes the West Midlands side can push on and beat their best ever haul of 49 Premier League points set back in 2012.

He added: “The first objective was to get to 40 points and we’ve got that. I think if we take one game at a time, focus on that, we can hopefully get past 50 points.

“It would be a big thing for me and a few of the lads who have been here a long time to achieve that - after that, who knows?”

The 28-year-old’s winning goal a minute from the end of the match lifted Caley off the bottom of the Premiership table with McKay still believing there is enough quality in the team to stave off relegation.

McKay said: “The squad is good enough – that can be seen from where they’ve finished in the table in recent years.

“I think we’ve got too much to be in the position we’re in, but we’re in it, and it’s only us who can get ourselves out of it.”

“The manager has brought me here to score goals,” added McKay, who netted 62 goals in 141 appearances during his first spell at the club. “It’s what I’ve done the whole time I’ve been here, and that’s why I’ve come up here.

“I want to score as many goals as I can and help the team.”

Elsewhere, Carl Winchester scored his first goal since joining Cheltenham Town last month as the Robins recorded a 1-0 success at Orient while Newry-born Shay McCartan was among the scorers for Accrington Stanley who picked up a point in their League Two encounter at Doncaster which ended in a 2-2 draw.

In the National League former Northern Ireland under-21 internationals Matthew McClure and Joe Jones were both on the scoresheet for Aldershot Town and Woking respectively.

Finally, after a seven-week lay-off because of a groin injury midfielder Ben Reeves returned to the MK Dons line-up for Saturday’s 2-1 victory over Shrewsbury, though Conor Washington, who had scored four goals in his last six outings, was forced to miss Queens Park Rangers’ visit to Preston due to a calf strain. The R’s lost 2-1.