Midfielder set to clock up a decade with the Baggies 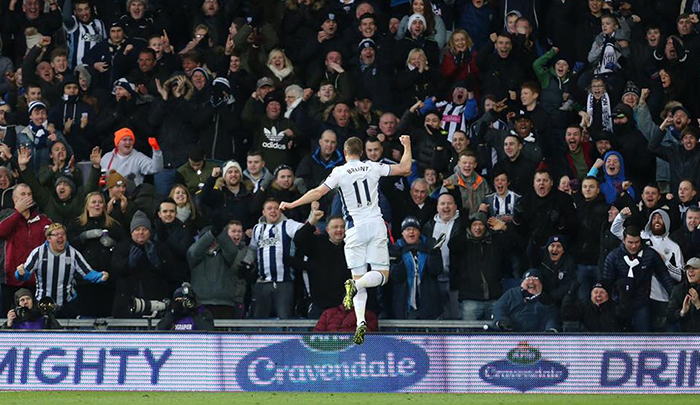 Brunt has committed his future to the Premier League club until at least the summer of 2018.

West Brom revealed the deal will automatically extend for a further 12 months, until July 2019, should the midfielder trigger a clause relating to appearances.

Brunt has been in superb form for the Baggies after recovering from the knee injury which saw him miss out on Northern Ireland’s trip to Euro 2016 in France.

The 32-year-old has been involved in six goals since returning to West Brom’s first team back in October - he spent eight months out of the game after damaging an anterior cruciate ligament - and he has started Albion’s last 15 Premier League fixtures.

West Brom head coach Tony Pulis said: “Chris has been a stalwart of this football club for a long time and he is a valued and popular member of the squad.

“It’s great that he has extended his contract and he has shown great character to return from his injury in the manner he has.

“His form has been terrific since returning to the team and long may that continue.”

The contract will see Brunt, who has 56 caps for Northern Ireland, and team-mate James Morrison become the first players to celebrate 10 years at The Hawthorns since Daryl Burgess (1987-2001).

Brunt told the Wolverhampton-based Express and Star newspaper he is now in the mood to help the club set a few records.

He explained: “When I first signed we wanted to establish ourselves as a Premier League team and we have definitely done that over the last few years. There are plenty of other teams who have not managed to stay up and push on the way we have.

“This year we have done really well. The results we have had, the points we have on the board, scoring goals as well, which was a problem last year. We have found a balance this season. Hopefully we can hit a few targets now as a club. We have never got to 50 points in the Premier League and it would be nice to do that.”

Brunt has made 331 appearances for the West Midlands club, scoring 45 goals, in the nine seasons that have followed his August 2007 arrival from Sheffield Wednesday.

He is the only player to have clocked up more than 300 appearances for the Baggies since Neil Clement retired in 2010.