Boys Across The Water round-up 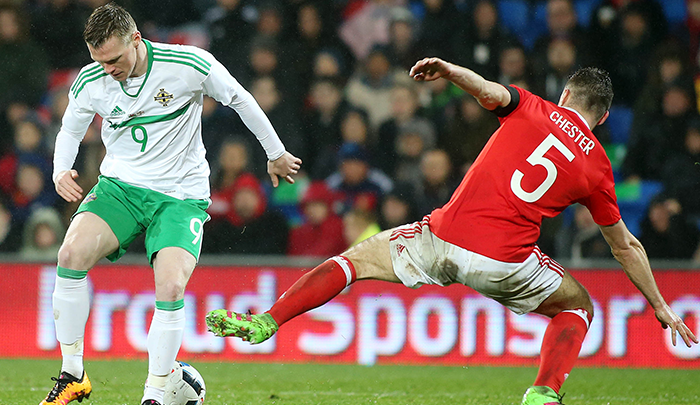 Striker Billy McKay scored his first goal since his return to Inverness Caledonian Thistle as the Highlands outfit fought back from two goals down to earn a draw at home to Dundee at the weekend.

The 28-year-old, who is on loan at Thistle from Wigan until the end of the season, scored from the penalty spot shortly after the break but had a second penalty saved on 73 minutes by visiting goalkeeper Scott Bain.

In League One in England, Caolan Lavery came off the bench to score his third goal of the campaign as leaders Sheffield United returned to winning ways with a comfortable 4-0 victory over AFC Wimbledon.

Queens Park Rangers forward Conor Washington thought he had found the net for a third successive game only to see his seemingly legitimate effort disallowed by the officials in the Hoops' 1-0 defeat at Blackburn Rovers.

The 24-year-old’s 61st minute header hit the underside of the Rovers crossbar and dropped behind the line - video replays showed it had clearly crossed the line - but the ‘goal’ was ruled out.

“It was clearly a goal and who knows what would have happened after that had we got it?" said Rangers boss Ian Holloway after the game.

“Conor was almost inconsolable in there (the dressing room). He thought he had three in three – he swears the ball went over the line.

“In the Premier League it would have finished 1-1 – because that would have been a goal (referring to goal-line technology) so it’s difficult to take.”

Meanwhile, in League Two Northern Ireland under-21 striker Louis Rooney made his debut for Hartlepool United whom he joined on loan from Plymouth until the end of the campaign.

The 19-year-old played the full 90 minutes of Pool's 1-1 draw at home to Yeovil Town on Saturday admitting he was relieved to finally get some game time.

He said: “It was great to get a full game under my belt. My last was at the very end of last season so I really did enjoy it.

“Just to be out on the pitch again and to be playing at this level is what I want to be doing.

“Being busy is my game. I like to run around, pass the ball, win it back and I felt I was unlucky not to get a goal but I'll keep getting those shots off."

He added: “I know it's a good club to be coming into and I could not say no to a move like this.”

Finally, in the Scottish Championship former Northern Ireland under-21 goalkeeper Conor Brennan made his first appearance for Raith Rovers since last September when he came on as a substitute for the injured Kevin Cuthbert 29 minutes into the eventual 3-0 defeat at Dundee United.