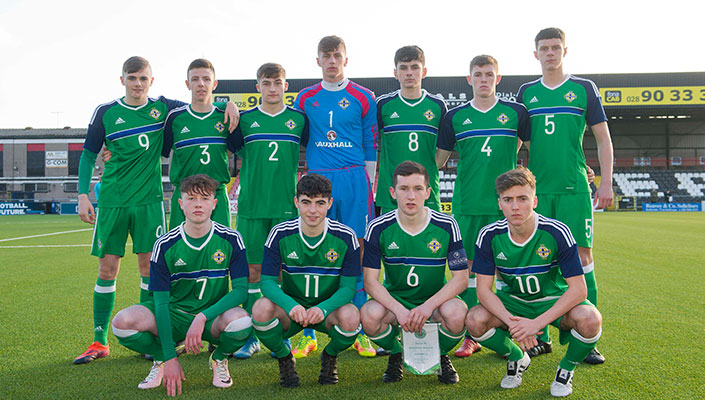 The Northern Ireland Under-18 Schoolboys’ team will play their first game in this year’s Centenary Shield next week.

Providing the opposition at the Bangor Fuels Arena on Thursday (2March) will be the Republic of Ireland, with a 3pm start.

Team manager Frankie Wilson said: “Our preparations have been going very well.  After 12 weeks of an intensive trial process we finally picked our squad for the Shield.

“Friendly games at home to Australia and away in Jersey over the past couple of months have been very beneficial as they gave the team much needed time together on and off the pitch.

“We currently have 22 members of the squad training which we have brought down to 18 for the Republic game. We have made one change from the squad that went to Jersey with an injured Jack Henderson being replaced by Lorcan Forde.”

He added that games against the Republic have always been competitive and he is expecting more of the same this year.

Organised by SAFIB (Schools Association Football International Board), the Centenary Shield is contested for by the U18 boys selects representing the schoolboy football associations of the UK plus the Republic.

The Republic are already top of the group after winning their first game against Wales last week thanks to a last minute goal. The game in Dublin ended 2-1

Northern Ireland’s second game in the competition will see them take on England in Torquay on 24 March, followed by a home game against Scotland on 31 March. Their final game in this year’s Shield will see them come up against Wales away on 12 April.

Image: The Northern Ireland U18 Schoolboys’ side who drew 1-1 with Australia at Seaview back in January.