Big guns make it through to quarter-finals 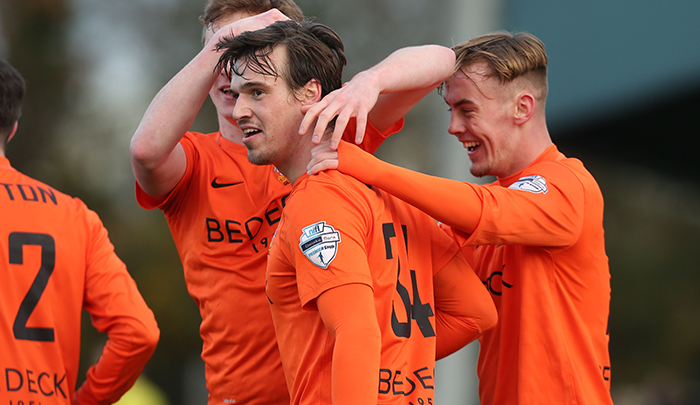 In the end all eight Tennent's Irish Cup sixth round ties went largely as expected, although it wasn't all plain sailing for the big guns.

After a scoreless first half the Championship outfit moved in front through David Rainey's 66th minute strike after he made the most of some poor defending from a throw-in.

However, the Sky Blues levelled seven minutes later through Kevin Braniff's back post header on what was his debut for the club.

Moving into extra time, Tony Kane whipped in a 97th minute free-kick to edge the visitors into the lead before Braniff made it an introduction to remember on 112 minutes with his second of the game.

Ballymena will face Coleraine in the last eight. While the Bannsiders experienced little difficulty defeating Tobermore United at the Showgrounds they had to do so on the strength of a solitary Jamie McGonigle goal after just seven minutes with an effort which went in off an upright.

The quarter-final draw produced another intriguing derby when it pitted Portadown against Glenavon at Shamrock Park.

In the last 16 Ports manager Niall Currie was back on his old stomping ground as he took his Premiership strugglers to Lakeview Park to face Loughgall.

But it didn't start off well for them. After just 11 minutes Peter Campbell fired the home side into an early lead after he nipped in to tuck away the rebound from a partially cleared shot. That was how it stayed until early in the second period when Shea McGerrigan brought the visitors back onto level terms from close range after connecting with Adam Foley's cross.

Then, just after the hour, Tiernan Mulvenna grabbed what proved to be Portadown's winner with a shot from an acute angle.

Holders Glenavon progressed with a two-goal victory over Armagh City at Holm Park. James Gray tucked home the opener on 32 minutes in controversial circumstances when the referee adjudged that City keeper John Connolly dropped the ball as he was about to clear it upfield - although the home side were vociferous in their claims that Rhys Marshall knocked it out of his hands.

Gray's opportunist finish was all that separated the sides until the 88th minute when Greg Moorhouse doubled Glenavon's advantage from the spot following a clumsy challenge on Marshall.

Crusaders kept up their pursuit of a league and cup double with a straightforward 2-0 win over PSNI at Seaview, although they had to wait until the 65th minute to seize the advantage through David Cushley's strike from the edge of the area despite an attempt by defender Ashton McDermott to clear the ball off the line.

The visitors suffered the loss of keeper David Harrison on 80 minutes when he collected his second booking before Jordan Forsythe added a second for the Hatchetmen in the closing minutes.

Linfield booked their quarter-final place in similar circumstances after they defeated Institute by two goals. Again both came after the break. Cameron Stewart opened the scoring on 50 minutes with a back post header after a Niall Quinn pass was deflected into his path.

Stute thought they had levelled on 72 minutes when Mark Scoltock headed home an Aaron Harkin delivery but referee Ian McNabb ruled it out after spotting some pushing in the build-up.

And, to make it worse for Institute, in the disagreement that followed Harkin was dismissed after collecting his second caution of the game.

The Blues made the most of their extra man soon after to put the tie to bed when Andrew Waterworth latched onto a through ball to slot a shot to the side of keeper Martin Gallagher.

Dungannon Swifts and Warrenpoint Town had the most emphatic victories of the afternoon, hitting four and five goals beyond Dollingstown and Crewe United respectively.

The Swifts had goals from Stefan Lavery, Seanan Clucas and two from Cormac Burke to thank for their victory while Dollingstown did have some consolation in the form of a Richard Thompson finish.

Point's goals came from five different players. Conor McMenamin, Stephen Murray and Phillip Donnelly all struck in the first half before Liam McKenna and Curtis Dempster added to the tally after the break. They now face the Swifts in the last eight.