In The Spotlight: Declan Devine 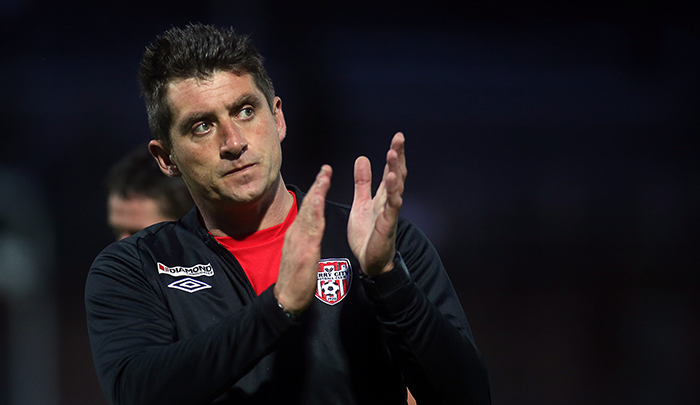 At the age of 19 Declan Devine took his first step on the coaching ladder.

Many would have viewed it as a strange decision because at the time Declan was a goalkeeper with Ipswich Town and appeared to have a long playing career ahead of him.

But Declan, who is now an Elite Performance Coach with the Irish Football Association working on the JD Club NI programme, instinctively knew he would not have a long career between the sticks and coaching was his next best option.

He left his native Derry-Londonderry for England when he was 16, signing a four-year contract with Ipswich.

Not long after joining the Tractor Boys he was injured playing for Northern Ireland’s under-17s.

He damaged a cruciate ligament in one of his knees and it took 13 operations - plus a lengthy spell of rehabilitation - to put things right.

However, despite making numerous appearances for the Portman Road outfit’s youth team and reserves, he knew the knee would not hold up for long. And that’s when he decided to explore coaching further. His first step was completing his B Licence with the FA in England.

He returned home to Northern Ireland when his contract with Ipswich expired. He initially played for Omagh Town and then joined Glentoran, with whom he won the Irish Cup in 1996. From there it was off to Derry City for a couple of seasons – and he won a League of Ireland title with them.

Declan hung up his boots at the age of 26, after having further spells with Omagh Town and Institute, largely because his knee could not take the strain of training and playing any longer.

After helping to set up and run the youth academy at Derry City he eventually became number two to Stephen Kenny at the North-West club and the pair steered them to two second-place finishes in the League of Ireland top flight plus an FAI Cup and two League Cup successes and memorable European runs, including a 0-0 draw against Paris Saint-Germain at the Brandywell.

At the end of 2006 he moved to Dunfermline Athletic along with Kenny and they managed to guide the East End Park outfit to a Scottish Cup final in 2007 where they lost 1-0 to Celtic, however the Pars were relegated from the SPL that season.

In December 2007 Kenny and Devine left the Scottish club and both returned to Derry City where they tasted success again, winning the First Division title in 2010.

When Kenny moved on to Shamrock Rovers at the end of 2011 Devine decided to stay put and was appointed manager of his hometown club.

In 2012 his Derry side lost the Setanta Cup final on penalties – it was won by Crusaders – but they lifted the FAI Cup, defeating St Patrick’s Athletic in the decider.

His second season in charge saw the team finish fourth in the league and reach a League Cup semi, however he left the club by mutual consent at the end of 2013.

Despite having offers to remain in management, he took up his current role with the Irish FA in March 2014.

He explained the opportunity to work with Jim Magilton, the Irish FA’s Elite Performance Director, was a “big attraction”.

Declan said: “Jim played at the highest level and managed QPR and Ipswich so having the chance to work with him was one of the main reasons why I took the job.”

Along with Magilton he has helped to firmly establish the JD Club NI programme.

He revealed: “When I started we could only get our players to lower league clubs in England and Scotland but now we have players signing for the likes of Chelsea, Manchester United, Arsenal, Liverpool, West Brom, Celtic and Rangers.

“By having our best players train and play together, by providing them with more contact time (up to 10 hours per week) as well as taking them to tournaments where they get to play top quality opposition at least a dozen times a year, we are starting to show real progress.

“The programme is definitely giving our best young players a platform to play against the best and to get noticed.”

He says the senior Northern Ireland team’s Euro 2016 success has helped our young players to see they can play at the top level with their country, with their home games played in a world class compact stadium.

Michael O’Neill also takes a keen interest in JD Club NI and Declan believes this is another major plus factor.

Image: Declan Devine during his time as manager of Derry City.