Lots of drama and excitement in the cup 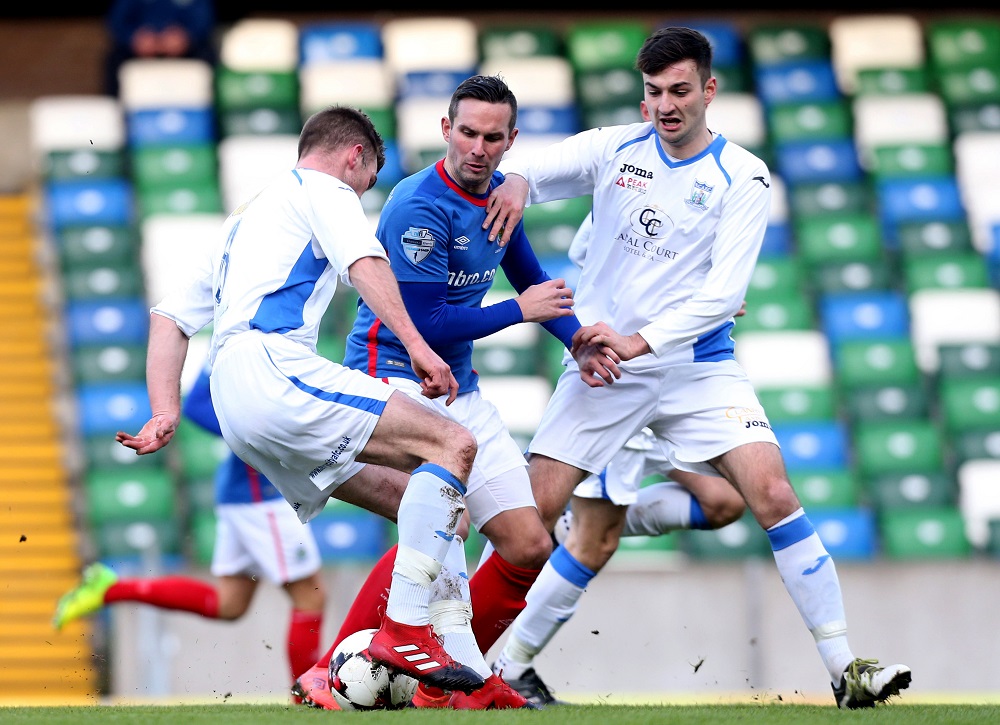 The undoubted tie of the round was the heavyweight clash between Cliftonville and Crusaders at Solitude. The Reds hadn't beaten their North Belfast neighbours for quite a while but they more than made up for that with an emphatic 4-1 victory, a win that included a hat-trick from Joe 'The Goal' Gormley.

The game was scoreless after 36 minutes when the Crues were reduced to 10 men after Declan Caddell's dismissal for a second bookable offence following a foul inside the area.

Gormley stepped up to take the resultant spot kick only to fail to find the target. However, referee Raymond Hetherington ordered the penalty to be retaken because Caddell hadn't left the field of play - and on this occasion Gormley made no mistake.

Then, not long from the break, the former Peterborough United man slotted home from the spot for a second time, awarded after Craig McClean was found guilty of a foul tackle on Rory Donnelly.

Gormley then notched up his hat-trick just before the hour after Donnelly squared a long ball into his path. And Stephen Garrett knocked home a fourth for the Reds a few minutes later.

Crusaders did grab a consolation through, ironically, a Gavin Whyte spot kick on 67 minutes but there was no way back for the league leaders.

Gormley wasn't the only player laying claim to a match ball. Glentoran's Curtis Allen was the afternoon's top scorer with all four goals at Dixon Park as the East Belfast men survived a potential banana skin against Ballyclare Comrades.

Allen hit a quickfire double inside the opening 10 minutes to put Gary Haveron's side into a commanding position early in the game.

He then grabbed his third on 38 minutes when some indecision in the home defence on the edge of the box allowed him through. He completed the scoring from the spot early in the second half.

Not to be outdone by the Reds and the Glens, Coleraine also hit four in their defeat of Championship leaders Institute at The Showgrounds.

Oran Kearney's men were quick off the mark with Jamie McGonigle's opener as early as the fourth minute from an inch perfect Lyndon Kane pass.

Two goals less than a quarter-of-an-hour later put the game to bed. A left-sided free-kick from Josh Carson came off the head of 'Stute's Dean Curry on 17 minutes before, 60 seconds after that, Eoin Bradley dinked the ball over keeper Gareth Muldoon from outside the box.

McGonigle then added number four - and doubled his tally - early in the second half after slipping past a defender to slot home.

However, the prize for most emphatic win of the day went to Larne. Tiernan Lynch's side made up for the disappointment of failing to make the top six split in the Championship with half-a-dozen goals at home to Dundela.

Matthew Henry kicked things off after 10 minutes with a 20-yard drive past Ryan McBride before, midway through the first half, David McDaid applied the back post finish to a Thomas Stewart dink.

A further double followed just after the half-hour mark. David Scullion scored with a lovely curling effort and Martin Donnelly slipped a neat shot under the keeper. Then Stewart got on the scoresheet just before the break from a tight angle after Gerard Thompson had played him through.

Donnelly added number six around the hour mark with an exquisite 25-yard free-kick. The Duns did find the net after that, though, when Jay Magee produced a powerful header from David McMaster's cross.

Larne are one of two Championship sides still in the competition. They are joined in the last eight by Loughgall, architects of the biggest shock of the day at Lakeview Park.

The Villagers knocked out Colin Nixon's Ards thanks to a Ricky Copeland 93rd minute winner at the end of a game that produced no fewer than three red cards - all of them for Ards.

It all started so well for the visitors. They moved ahead after just 43 seconds when Josh Kelly curled home a deflected effort from the edge of the box but they were pegged back before half-an-hour had elapsed when Gary Liggett, ironically a transfer window arrival from Ards, levelled from the spot after Nathaniel Ferris had been brought down.

Ards then suffered the loss of Kyle Cherry, Michael Ruddy and Ross Clarke within a 30-minute spell in the second half before Copeland popped up with that late, late winner just as extra-time loomed large.

Two sides that couldn't be separated after 90 minutes were Ballymena United and Ballinamallard United. Indeed it took a penalty shoot-out to decide the winners of this one.

The Mallards raced into a two-goal lead inside the opening half-an-hour when first Stephen O'Flynn and then Shane McGinty found a way past Ross Glendinning.

The Sky Blues pulled one back through Johnny McMurray to reduce the deficit at the break but despite creating a number of chances during the second half David Jeffrey's outfit still trailed going into the closing minutes ... before that man McMurray grabbed his second of the day with a shot past Richard Brush via an upright.

Extra-time failed to produce any further goals with Ballymena eventually progressing thanks to McMurray, Cathair Friel, Tony Kane and Jim Ervin finding the net during the shoot-out.

Gary Hamilton's charges had squandered the opportunity to seize a 10th minute lead when Sammy Clingan saw a spot kick saved by Stuart Addis before Andy Mitchell's close range right-foot effort moments from the break eventually handed them the advantage.

The Swifts suffered the dismissal of Mark Patton after an hour for a late tackle on James Singleton.

Making the most of the extra man, Glenavon extended their lead soon after through Stephen Murray before Mark Griffin added number three right at the end. 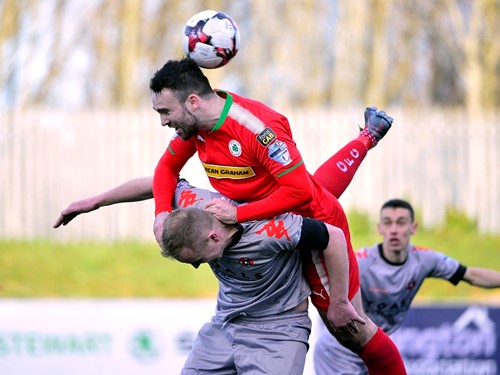 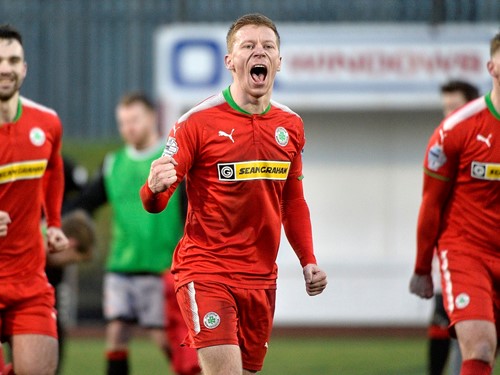 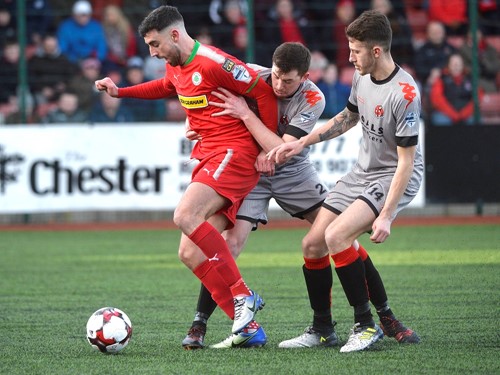 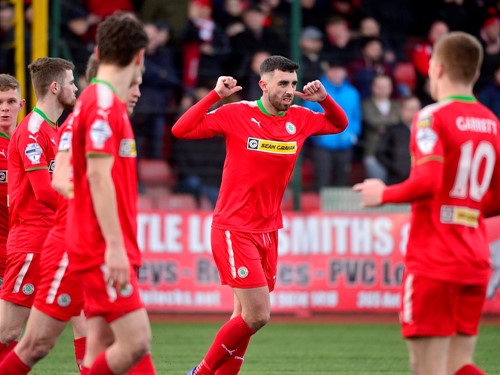 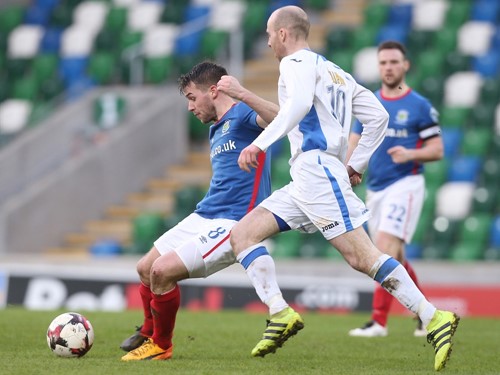 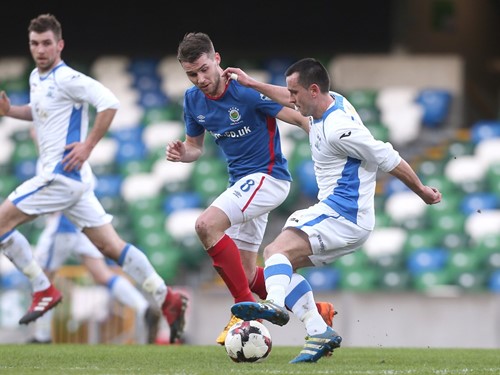 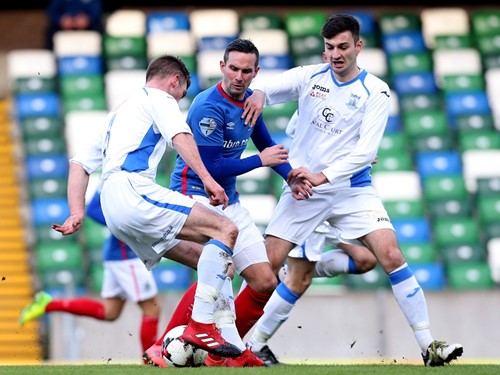 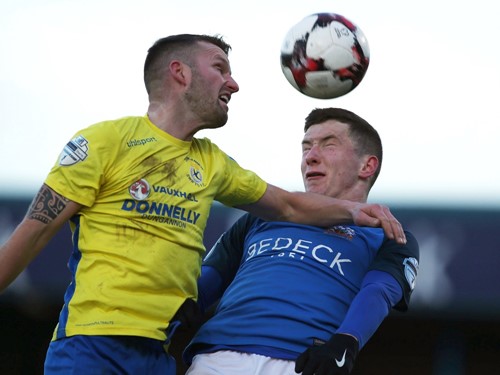 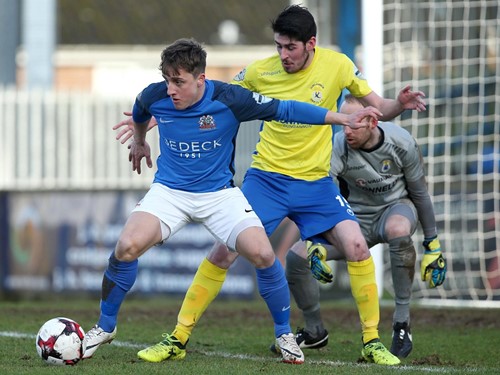