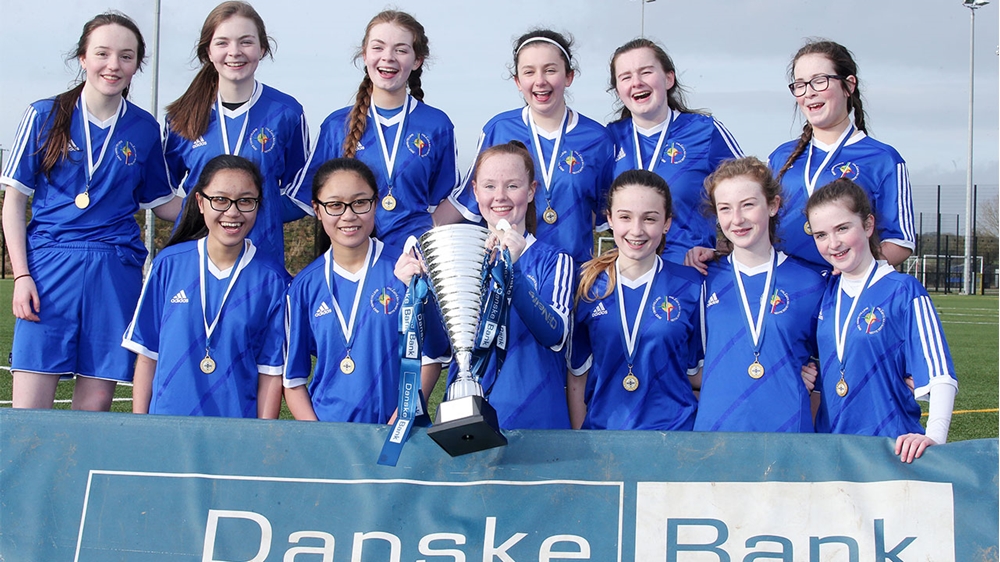 The teams played each other once with the top four advancing to the semi-final stage of the NISFA competition for Under-15 sides.

St Genevieve’s, who qualified for the finals as best runners-up in the regional tournaments, won all five of their group games in Antrim with St Louise’s (four wins) in second. Holy Cross and St Joseph’s Belfast also advanced to the semis with three wins each.

The final was a very close encounter with a single Holy Cross goal enough to win the trophy for the Strabane school.

Richard Lapsley, manager of Danske Bank’s Antrim branch, said: “At Danske Bank our youth partnerships are very important to us and we are privileged to support the Northern Ireland Schools’ FA girls’ 11-a-side competition for the first time this year alongside other sponsorships with schools’ rugby and GAA.

“On behalf of Danske Bank I would like to commend all the teams who played in the competition, especially the six teams who made it through to the regional finals, and finally congratulations to this year’s winners, Holy Cross Strabane.”

In the first of the regional heats, at Ulster University Coleraine, Lisneal College and St Mary’s College excelled with St Mary’s eventually running out group winners.

Last year’s winners, Belfast’s St Louise’s College, booked their place in the finals after winning a very tight match against St Genevieve’s in the Belfast/Antrim heat.

In the Tyrone and Fermanagh heat Holy Cross showed their strength in depth with their A team having to play their B team in the final.

In the Down heat St Joseph’s proved too strong for the other teams, while Clounagh Junior High won through to represent the Armagh, Banbridge and Craigavon area at the regional finals.