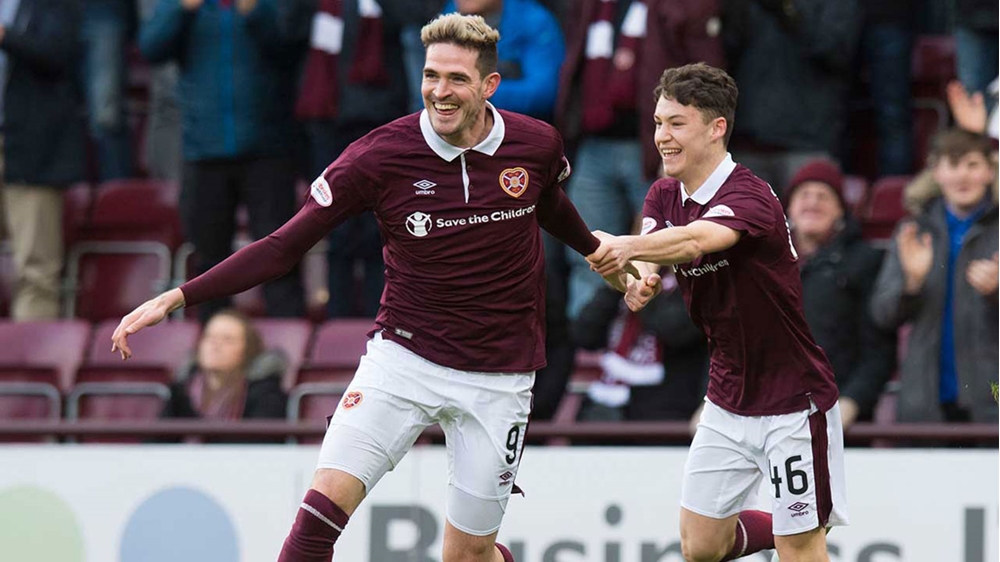 Striker Kyle Lafferty took his goal total for the season to 14 after firing home a brace in Hearts' 3-0 Scottish Cup victory against St Johnstone on Saturday.

The 30-year-old Fermanagh man opened the scoring on just seven minutes, drilling a low shot past Saints keeper Alan Mannus, before sealing the contest just before the hour mark when he slotted home a pass from fellow Northern Ireland international Michael Smith.

Hearts boss Craig Levein, whose side now face a tricky quarter-final tie at Motherwell next month, praised Lafferty for his goal contribution this term.

“Kyle’s accuracy in front of goal this season has been excellent,” stated Levein. “We’ve seen that with the goals that he’s scored for us this season.

Also on the scoresheet over the weekend was Conor Washington who took his total for the campaign to six when he managed a consolation goal for Queens Park Rangers in their 2-1 reverse at runaway Championship leaders Wolves.

Northern Ireland under-21 striker Paul Smyth was missing from the Hoops line-up though as he is still sidelined with a thigh injury.

In League One Shay McCartan scored his fourth of the season and his first for Bradford City since New Year’s Day as the Bantams ended a run of six straight defeats with a point in a 2-2 home draw with Bury.

Under-21 midfielder Jake Dunwoody, who is currently on loan with Curzon Ashton from Stoke City until the end of the season, scored his first goal since joining the Evo Stik Premier outfit in the 3-3 draw at Boston United.

Meanwhile, Liam Boyce continued his comeback when he played a further 19 minutes as a substitute in Burton Albion’s hard-fought scoreless draw at Ipswich Town.

Also in the Championship Stuart Dallas filled in as an emergency right back in the 2-1 defeat at Sheffield United – it was the former Crusaders midfielder’s first full 90 minutes for the club since the end of October.