Simone Magill ‘extremely proud’ to be working with charity 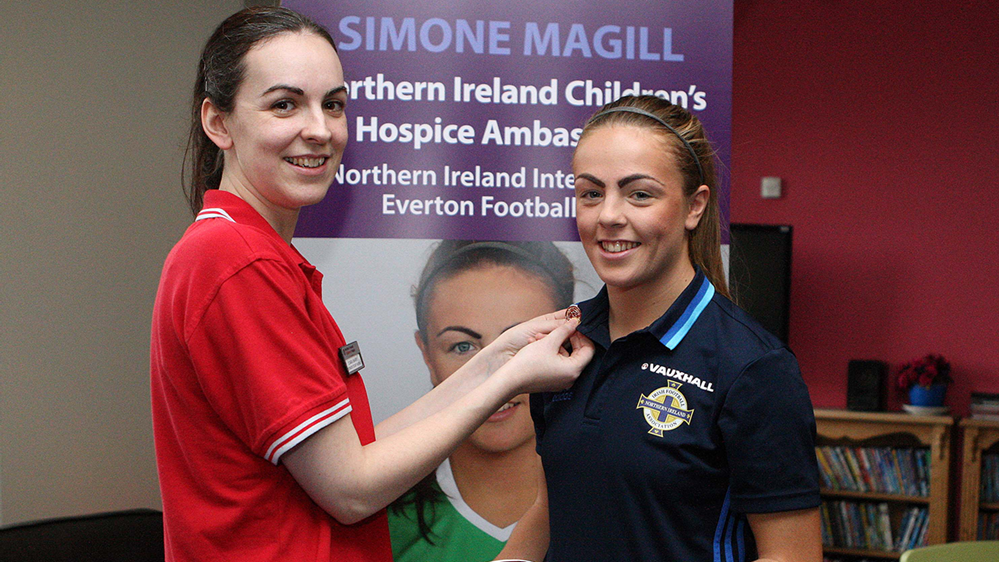 The 23-year-old from Magherafelt, who plays for Everton Ladies, took time out from preparing for a Women’s World Cup qualifier away to Slovakia next week to tour the hospice and receive her ambassador’s pin from nurse Ciara Barry.

She was accompanied to the Newtownabbey-based hospice by Northern Ireland Senior Women captain Marissa Callaghan and team-mate Julie Nelson.

A sports education graduate, Simone became the first player from Northern Ireland to become a professional with a Women’s Premier League club in England when she joined Everton in 2013. In 2014-15 Everton fans voted her player of the season.

“It is the only children’s hospice in Northern Ireland and we all know and appreciate the amazing dedication that goes into providing palliative care and support to young patients and their families.

“It was without any hesitation that I agreed to become an ambassador of this wonderful charity. I am very humbled to be a part of it and very thankful for this opportunity to work alongside staff, families and patients."

“When I first learned of Simone’s career I was fascinated. I think it’s wonderful that someone so young has achieved so much both academically and in her chosen sport. There’s only one girl in the world who can say she scored the fastest goal in international football, and she’s one of our own. We are very proud to have her in our team and excited about working with her in the future.”

Grace Stewart, Head of Clinical Services at Northern Ireland Children’s Hospice, said: “It’s great to see Simone take on the role of ambassador. Through her profile and popularity she will reach new audiences and raise awareness of our work in the hospice and in the community, and that level of support is priceless.”