Davis promises team will "give it their all" in Switzerland clash 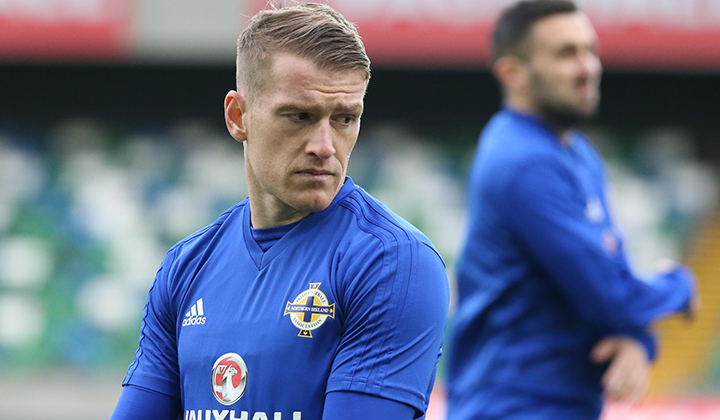 But the fact the Swiss are the highest ranked team - 11th - among the eight sides vying for the four remaining European places at FIFA World Cup Russia 2018 will not faze the boys in green.

Northern Ireland have only been beaten at home in tournament qualifiers by world champions Germany and current European champions Portugal over the past four years.

That solid defensive rock coupled with a desire to get on the front foot in the two-legged play-off – the second game is in Basel on Sunday evening – should see Michael O’Neill’s side give it a go while keeping it tight at the back.

Northern Ireland captain Steven Davis, who will earn his 100th cap tonight, believes his team can do it.

He said: “I think in the first game we have to keep a clean sheet first and foremost. Naturally, we will be looking to win the game. It would be great to have a good foothold going into the second leg.

“It will be difficult. Switzerland are a top quality side. You just have to look at their results in their qualifying group and their world ranking. However, I have belief we can go and achieve it and I am really looking forward to it. I am certain the boys will give it their all.”

Switzerland look set to be without their enforcer, Valon Behrami. The Udinese midfielder, who has been carrying an injury, was expected to do a man-to-man marking job on Davis. His exclusion could mean Northern Ireland’s latest centurion will have more room to roam – and more space to weave his magic.

Arsenal midfielder Granit Xhaka may step into Behrami’s shoes but that’s unlikely as he is seen as the Swiss playmaker.

The Northern Ireland defence - with Jonny Evans and Gareth McAuley at its heart - will need to be at their best to repel Switzerland’s attacking threat. On his day Stoke City winger Xherdan Shaqiri can produce some brilliant moments and they will have to keep a close eye on him.

But there are others who can be dangerous. Benfica striker Haris Seferovic is no slouch in front of goal, while Bayer Leverkusen’s Admir Mehmedi also knows how to find the net. And Schalke’s Breel Embolo is an exciting young talent.

Northern Ireland are expected to adopt a 4-4-2 formation but who gets the starting berths up front in particular is generating plenty of debate. Tenacious winger Jamie Ward would run through walls for Northern Ireland but his lack of match fitness may keep him on the bench.

Kyle Lafferty has been doing the business for Hearts and could arguably start. However, Michael O’Neill looks likely to plump for the lively Conor Washington, who has had a good season to date with QPR, and move Josh Magennis into a central attacking role. And that could pave the way for either George Saville or the flying machine that is Jordan Jones to play from the start.