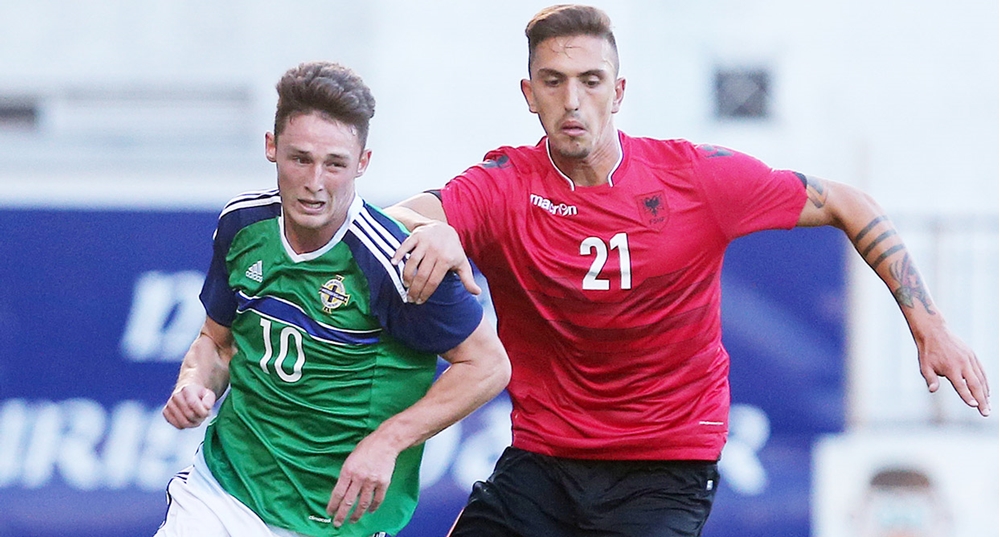 Ian Baraclough's Under-21s have gone back to the top of Group 2 in their European Under-21 Championship qualifying group after snatching a point with a late equaliser in Albania.

Northern Ireland went into the game second in the group having won three out of their four games. Spain were at the top of Group 2 on goal difference but still have to play Northern Ireland twice.

The first 15 minutes saw several free-kicks awarded to both sides in dangerous positons only to be cleared by the defences.

Mark Sykes was the first to go into the referee's book. He received a yellow after chasing down a stray ball.

Paul Smyth and Dale Gorman then both had half-chances blocked by the Albanian defence.

Albanian skipper Keidi Bare went into the book just before the half-hour mark for a challenge on Dale Gorman. The pair were separated again minutes later by the referee after another hard 50-50.

In the best chance of the half Kristal Abazaj latched on to a fantastic ball over the top and cut it back for Rubin Hebaj whose shot from outside the box was neatly saved by Conor Mitchell.

Keidi Bare was involved again when he brought down Jamie McDonagh after he had produced a great run down the wing. Dale Gorman picked up a yellow card for urging the referee to send off Bare.

Ryan Johnson and Paul Smyth were also booked in the closing stages of the first half.

The opening 15 minutes of the second half saw attacks from both sides with Albania having the better of them. A powerful shot went wide and Ryan Johnson was called upon to make several important clearances.

Josh Doherty left the field to be replaced by Ben Doherty who was involved straight away, making a great last ditch tackle to deny Albania.

Northern Ireland then had a great chance when a long throw from David Parkhouse found Cameron Dummigan and his firm header went just past the post.

Albanian substitute Agim Zeka was lively after entering the fray and unleashed a fierce shot which brought a fine stop from Conor Mitchell.

With seven minutes to go Albania’s Yiber Ramadani drilled a shot into the bottom corner of the net to make it 1-0 to the hosts.

Northern Ireland then piled on the pressure and deservedly equalised when Shayne Lavery produced a superb header from a Jamie McDonagh cross in the 89th minute.

You can see the starting 11 for Northern Ireland by clicking on the video at the top of the page.