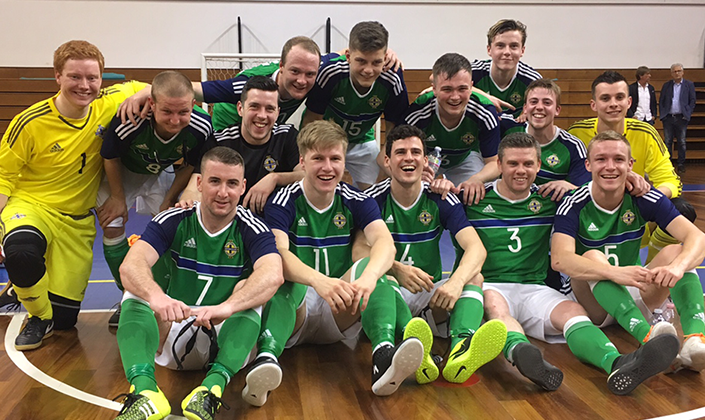 The squad travel to Gibraltar next Thursday (30 November) and will play at The Venue on Friday and Saturday. The following week the squad will travel to Edinburgh to participate in the second Home Nations Championship, playing three games in three days.

Speaking about his squad selection, Jonathan Michael said: “Over the past number of months we have been able to add to the group and we have had more regular training sessions with the players.

"The establishment of the Northern Ireland Futsal League has provided our players with more opportunities to play competitive games and I am confident that this league will strengthen year on year.

"The Home Nations Championships in Wales last December assisted in raising the profile of the game here in Northern Ireland. Within 12 months we have played five international games, established a domestic league and have had our league champions participate in the UEFA Futsal Cup.”

Jonathan added: "It has been a year since we established our international futsal programme. We are still on a steep learning curve but the improvement in the squad has been incredible. By the end of the year we will have played 10 international games and our players will go into 2018 with increased experience.”

He explained the squad will be going into the Gibraltar games with confidence and looking to build on what they achieved against San Marino in May.

He added: "We have a determination to produce a high level of performance and prepare effectively for the Home Nations Championships the following week. As a group we know that we are steadily progressing and we aim to give a good account of ourselves in these next five games and demonstrate how far we have come in 12 months.”