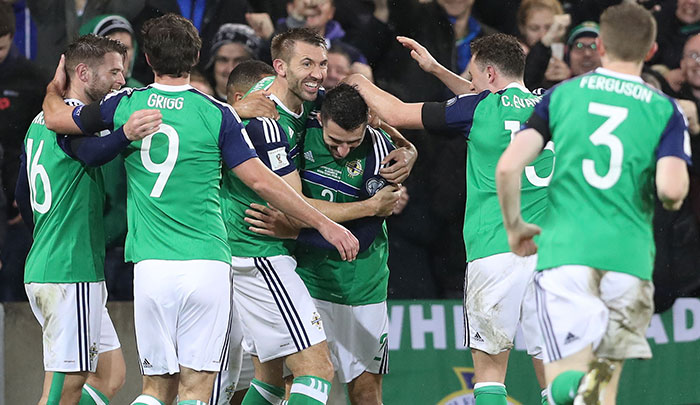 Like Northern Ireland, Croatia reached the Round of 16 at Euro 2016. They topped their group after defeating both Spain and Turkey and drawing with Czech Republic.

They were knocked out by eventual winners Portugal in the next round. The game in Lens went to extra time, with Quaresma scoring the only goal of the game.

A 1-1 home draw with Turkey was followed by defeats of Kosovo, Finland and, immediately prior to Tuesday's game, a 2-0 victory over Euro 2016 quarter-finalists Iceland in Zagreb.

Northern Ireland manager Michael O'Neill said: “This will be a great game for us. Croatia are a top class European team and it’s great that we will be playing them at home.

“We have not played a home friendly against this quality of opposition for quite some time. It will no doubt be a real test for us, and it will also provide us with an opportunity to look at some of the players in our squad who have not featured in the team much before now.”

And, of course, Northern Ireland go into the game on back of that four goal win over Azerbaijan, which lifted O’Neill’s side into second spot in the Group C.

The Northern Ireland boss has been forced to tinker with his panel slightly since Friday night.

Linfield ‘keeper Roy Carroll makes his return to the squad following the departure of Trevor Carson through injury. Striker Conor Washington has also returned to his club for similar reasons.

When your squad is littered with star names from clubs in either La Liga, Serie A or the Bundesliga it's hard to single out any individual for special attention.

Mario Mandžukic will provide a threat up front. Now turning out for Juventus, he previously picked up a glittering array of honours - domestic, continental and worldwide - during a spell with Bayern Munich.

Indeed, Brozovic is currently at the top of his game after grabbing both goals in Saturday’s win over Iceland and will undoubtedly provide a stern test for the home defence.

Marko Rog has started to establish himself as a rising star in the Croatian side.

The 21-year-old midfielder recently signed a five-year deal with Serie A side Napoli following a successful spell back home with NK Varaždin, RNK Split and then Dinamo Zagreb.

Despite only having a handful of appearances to his name he was drafted into the Croatia squad for Euro 2016 and since then has picked up a further two caps in the current World Cup qualifying campaign.

Equally as comfortable on either side of midfield, he uses his pace to great effect and can pose a particular threat when afforded some space.

Croatia's most capped player of all-time is the recently retired (from international duty) Darijo Srna who, in a career spanning from 2002-2016, amassed a staggering 134 appearances, scoring 22 goals along the way.

The 34-year-old represented his country at no fewer than two World Cups and four European Championships, most recently in France this summer.

A mainstay for Shakhtar Donetsk, he helped them to eight consecutive Ukrainian league titles and captained them to victory in the 2008/09 UEFA Cup final over Werder Bremen in Istanbul.

Topping the all-time scoring charts is one Davor Šuker, a man who needs little introduction.

With a staggering 45 goals from just 69 caps, the 1998 World Cup Golden Boot winner terrorised defences at his peak and during his time at Real Madrid picked up Champions League and Intercontinental Cup winners medals.

His playing career also took him to Sevilla, Arsenal and West Ham United amongst others whilst he has also been honoured on two occasions by the Croatian government.

Tuesday night marks the first ever meeting between Northern Ireland and Croatia at Senior, U21 or even U19 level.

Indeed, you need to drop down to Under 17 level for the most recent game at any level between the sides - and even then that was as far back as September 2003 in a UEFA European Championship qualifier in Finland when a Michael Carvill goal on 80 minutes earned Kenny Shiels' side a 2-2 draw in a campaign that eventually took them all the way to the finals for the first and, thus far, only time.

Prior to that, the only other clash was a 2-1 win for Croatia in an Under-18 qualifier at Bangor in November 1997 when Wesley Boyle found the net in the first half.