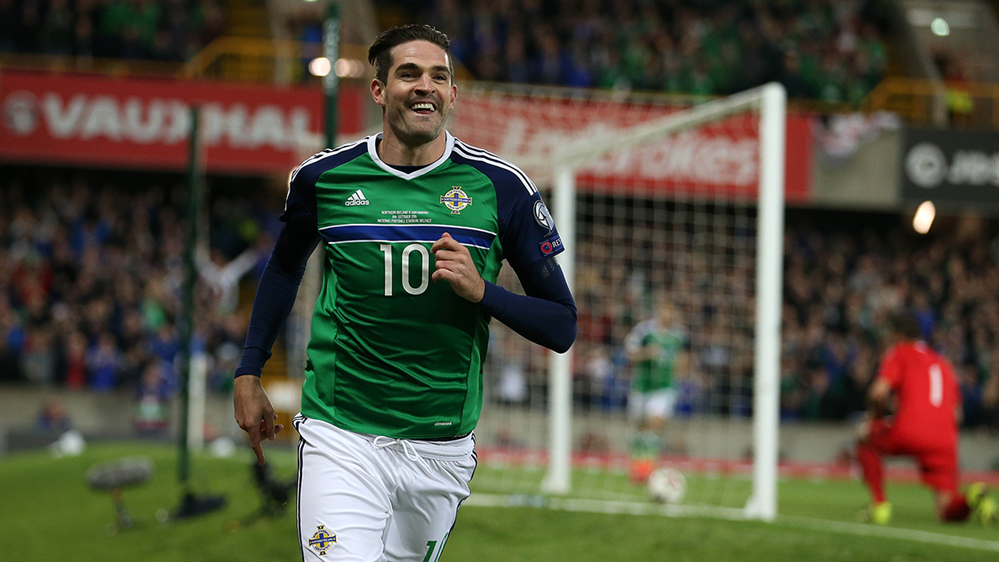 Northern Ireland resume their World Cup qualifying campaign with the visit of Azerbaijan to the National Stadium at Windsor Park on Friday night (kick-off 7:45pm).

Although nominally one of the lower seeded teams in Group C, Azerbaijan come to Belfast in second place just behind Germany after three games.

Currently ranked 88th by FIFA, their highest ever position, the Azeris have thus far beaten both San Marino and Norway by a goal apiece and earned a scoreless draw away to the Czech Republic.

Whilst goals may appear to be at something of a premium, it is notable they have yet to concede and unlocking that thus far impenetrable defence may prove to the biggest challenge facing Northern Ireland on Friday night.

Northern Ireland go into the game with four points from three games, although that includes a 2-0 reversal to favourites Germany last month.

Prior to that San Marino were defeated by four goals without reply while, like Friday's visitors, a point was obtained from a scoreless draw in the Czech Republic.

Michael O'Neill has suffered the loss of Jamie Ward and Stuart Dallas through injury for both this and next Tuesday's Vauxhall International Challenge Match against Croatia.

Under the guidance of manager Robert Prosinečki, appointed in December 2014, the 'Milli' have steadily progressed and have lost just once in their last six outings.

And, according to the 47-year-old Croatian, his side could surprise people during the current qualifying campaign.

"We really, really work a lot! And we convinced players to believe in us and in their own capabilities, now they believe they can surprise everyone,” he said.

"Victory over Norway and a draw in Czech Republic are really big results and now there is football euphoria in Azerbaijan, people believe in us, they have never had such results and successes.

"Every day we get better and better, we are tough, have good timing in duels and play serious football. These results are not by accident. We want Azerbaijan to play football, not only to defend."

No fewer than 18 members of Prosinečki's 25-man squad ply their trade at home in the Azerbaijan Premier League with eight of that number on the books of champions Qarabağ FK.

Amongst them is skipper Rashad Sadygov, Azerbaijan's most capped player of all time with 105 appearances to his name since making his debut against Sweden in 2001.

The 34-year-old has had a somewhat varied playing career, with spells in Turkey and Iran as well as a number of clubs back home.

Interestingly, after missing a registration deadline in 2006, Sadygov turned to basketball for a while in order to keep fit, playing for local club BK NTD!

In goal, Azerbaijan are likely to feature Kamran Aghayev, now on the books of Portuguese Primeira Liga side Boavista. He made the switch earlier this season and has impressed with a couple of clean sheets in his five appearances to date.

The 30-year-old is also renowned for saving penalties, having stopped no fewer than ten of the 13 he has faced for Azerbaijan!

Eddi İsrafilov (or Silvestre) has recently broken into the national team, picking up seven caps since taking his bow in a friendly against Malta in March 2015.

The 24-year-old midfielder plays for Cádiz CF in the Spanish Segunda Division, having recently signed a two-year deal for the newly promoted side. Spanish by birth, he qualifies through his Azerbaijani mother although could also have opted for Angola.

Azerbaijan's all-time leading scorer is Gurban Gurbanov, with 14 goals in 67 appearances during a career stretching 13-years from 1992 to 2005.

As a player, he won four domestic titles and two cups, a level of success he has carried through to his new role as a coach.

Currently in charge of Qarabağ FK, he has guided them to three successive league titles and is the most successful Azerbaijani manager in European competitions with 25 wins to his credit.

Despite only being a member of FIFA since 1994, Azerbaijan are no strangers to Northern Ireland, with Friday's clash being the fifth between the nations, each one coming during a World Cup qualifying campaign.

The first meeting, in Baku back in 2004, ended scoreless. The return, on September 3rd 2005, saw second half goals from Stuart Elliott and Warren Feeney set Lawrie Sanchez's side up for that altogether more famous defeat of England four days later.

Azerbaijan were back in Belfast four years ago, when only a David Healy goal six minutes into added time salvaged a point for Northern Ireland.