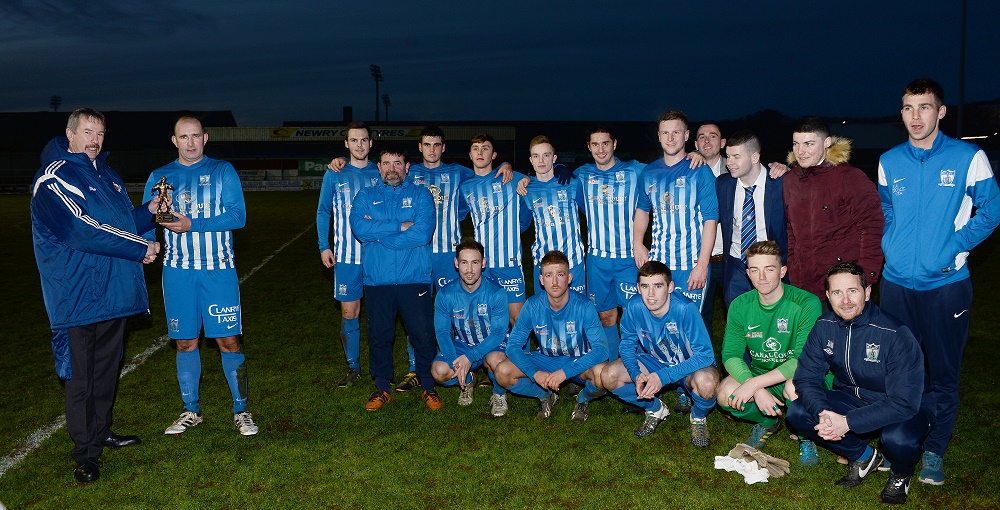 Sean McMullan helped himself to an impressive four-goal haul as Newry City AFC swept to a 5-0 victory over visitors Ballymena United Reserves in the Second Round of the IFA Intermediate Cup.

As the match started it was obvious that Newry set out to frustrate the Sky Blues by pinning them back into their own half. The tactic paid early dividends when, on ten minutes, McMullan opened the scoring with a close range glancing header.

United might have levelled four minutes later when, following a bit of pushing in the area, the referee pointed to the spot but Nathan Fox could only look on as his penalty was saved by Newry 'keeper Jack Heaney.

Newry again took the initiative and McMullan stooped to connect with a well placed pass to head past Ballymena 'keeper Tom Hegan for his second goal.

The game settled into a midfield battle with Newry showing the most commitment but with no reward.

Already facing an uphill challenge, United's task was made even greater moments from the break when they were reduced to ten men after Fra McCaffrey was shown a straight red card.

Newry came out all guns blazing in the second half, and it only took three mins to see McMullan get his hat-trick with a side footed finish inside the six yard box.

Then, on the hour, McMullan struck again in spectacular finish when, with his back to goal, he beat the 'keeper with an overhead kick to take his tally to four for the afternoon.

The final nail in the Ballymena coffin was hammered in by Marty Havern on 73 minutes after he picked up a pass outside the area and had a unchallenged run on goal before dispatching a low hard shot finish beyond the advancing 'keeper.