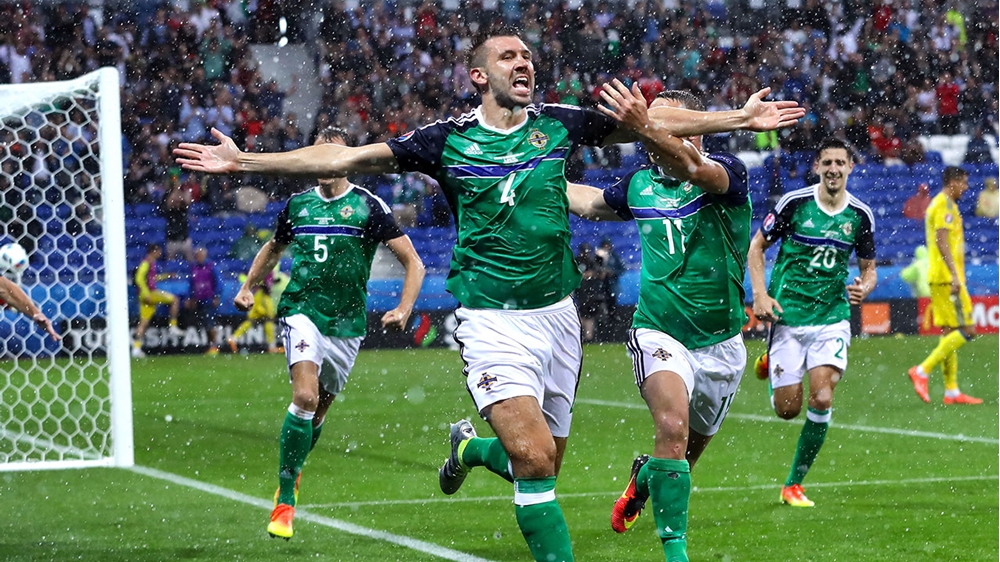 It was Northern Ireland's first ever appearance at a European Championship finals and McAuley scored the historic opening goal in the game which Northern Ireland won two nil. All money raised from the raffle will go to the Cancer Fund for Children.

McAuley launched the raffle on a visit to Daisy Lodge, the charity's therapeutic short break centre where he and the rest of the Northern Ireland squad saw first-hand the difference residential support makes to the lives of families devastated by a childhood cancer diagnosis.

Following a tour of the facility the players had a meet and greet with families and ran a football skills session with some of the children.

Gareth McAuley said: “I have been lucky in football to have had a lot of great experiences and to have some wonderful memories.

"I wanted to donate the shirt to the Cancer Fund for Children to give something back and to raise as much money as possible for a great cause. The shirt is something that is very special to me, so hopefully it will go to a good place.”

Cancer Fund for Children’s Corporate Fundraiser, Sorcha Chipperfield said, “We were beyond thrilled to welcome the Northern Ireland Team to Daisy Lodge and to meet some of the families we support.

"The team has already raised over £50,000 through the donation of match fees and charity collections at the Fan Zones in Belfast during their matches in France.

“It is wonderful that Gareth McAuley is also donating his signed football shirt which we are raffling to raise even more funds. This is a fantastic opportunity for Northern Ireland football fans to win a piece of local footballing history.

“Fans, and their friends and family, can enter the raffle at a cost of just £1 per ticket. The more raffle tickets you purchase, the more the chances you have to win, and the more funds Cancer Fund for Children receive – it’s a win-win!”

Every week in Northern Ireland another three children, teenagers and young adults are diagnosed with cancer.

As the leading children’s cancer charity in Northern Ireland, Cancer Fund for Children understands the devastating impact a cancer diagnosis and treatment can have on the whole family and that beyond essential medical care there is a family life that needs to be rebuilt.

The charity offers practical, emotional and financial support as well as free short therapeutic breaks to local families whose lives have been affected by the illness.

Fans can take part in the raffle to be in with a chance of win Gareth McAuley’s signed shirt by visiting www.raffleplayer.com/mcauleyshirt or by visiting www.cancerfundforchildren.com