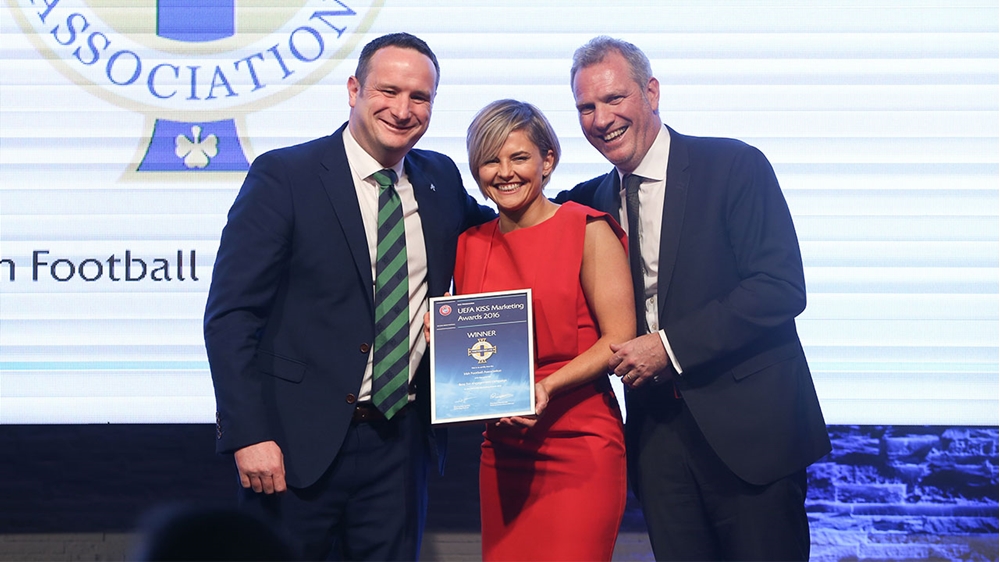 The Irish Football Association has fought off competition from 24 other national football associations to win first prize for ‘Best Fan Engagement Campaign’ at the prestigious 2016 UEFA KISS marketing awards.

The awards, held every two years, recognise and reward creativity in marketing across the European football family.

The Irish FA’s application highlighted its work engaging Northern Ireland supporters before, during and after the country’s historic participation at EURO 2016.

The independent panel of judges voted the Irish FA number one ahead of three other shortlisted nations - Germany, Romania and Israel - and paid tribute to the association for putting Northern Ireland fans at the centre of its marketing and communications activity around the tournament.

The judges also praised the Irish FA’s efforts in using creative content to help unite the country behind the team.

Oonagh O’Reilly, Director of Sales and Marketing at the Irish FA, said: “I am absolutely delighted that the Irish FA marketing and communications team has won this prestigious award and through it our fans have once again been recognised as the best in Europe.

“This shows that although we are a small association our work in this area is world class. Our aim is to continue to inspire every young boy and girl across Northern Ireland to be part of our football family and to dare to dream of wearing the green shirt.”

There was double celebration at the Irish FA this week as the association was also named Best Digital/Online Company of the Year at the annual UTV/Business Eye Awards.