Linfield Rangers lifted the Irish FA’s Harry Cavan Youth Cup for the 20th time in their history thanks to a resounding 4-1 victory over St Oliver Plunkett tonight.

The young Blues controlled the youth cup decider at the National Football Stadium at Windsor Park from start to finish – despite playing with only 10 men for more than half the game.

Linfield, the NIFL U18 league champions, and Plunkett, the U18 National League title winners this season, both started brightly, however once head coach Ryan Prentice’s Linfield side had scored twice by the half-hour mark there was only going to be one winner.

Linfield took the lead in the 19th minute. Striker Ross Weatherup twisted and turned between a couple of Plunkett defenders inside the area and slid the ball past the advancing keeper into the net from around seven yards.

Three minutes later Plunkett centre forward Calvin McCurry outfoxed his marker and his low drive from 10 yards was well saved by Linfield keeper Conor Friel with his feet. The ball was cleared but was immediately launched back into the area where McCurry sped through to slot the ball home, however his effort was ruled offside.

Linfield almost doubled the lead on 27 minutes. Captain Jake Corbett produced a penetrating run into the heart of the Plunkett defence and slipped the ball past a defender before lobbing SOP keeper Sean Saunders, however his effort landed the wrong side of the upright.

Two minutes later McCurry fed the ball to Plunkett’s Dylan Maguire inside the area but his low drive was cleared by the Linfield defence.

On 32 minutes Linfield doubled their lead when Corbett made amends for his earlier miss. Plunkett failed to clear a cross into the box and it fell to the midfielder who smashed the ball into the net from 14 yards.

In the 37th minute Linfield were reduced to 10 men when keeper Friel was given his marching orders. McCurry broke clear down the middle and Friel raced off his line to meet him but handled the ball outside the area when the striker tried to lob him – and referee Jonny Reid immediately brandished the red card.

Defender Jack Scott replaced Friel between the sticks, while man of the match Corbett dropped back from midfield to partner John McGivern in the centre of defence.

McCurry stepped up to take the free-kick given for Friel’s handling offence but blasted his shot over the bar.

Rangers striker Kennedy then popped up in added time at the end of the half to put the Blues 3-0 up. In making a clearance Blues defender Connor Maxwell launched the ball up the park and Kennedy was alert to latch on to it and beat the keeper with an exquisite lob from 14 yards.

Even though they had an extra man Plunkett rarely threatened the Linfield goal in the second half as the young Blues gave them little or no time to settle on the ball.

On 52 minutes Maxwell hammered a free-kick from 25 yards over the top and minutes later Blues winger Callum McVeigh drilled an effort over the bar.

The Blues extended their lead on 79 minutes. Wynne broke down the right and neatly lifted the ball to the onrushing McVeigh who headed home from close range to make it 4-0.

In the final minute Michael Mervyn volleyed in a consolation goal for Plunkett, leaving the final scoreline at 4-1. 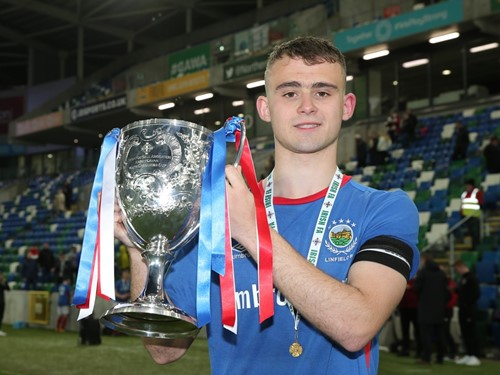 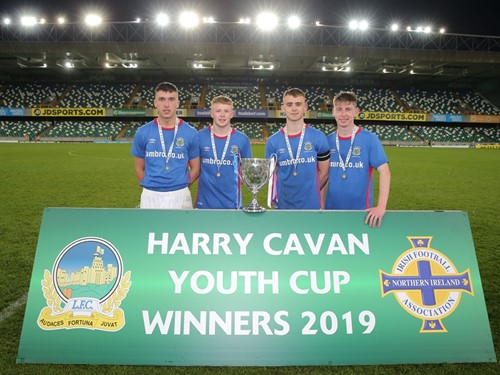 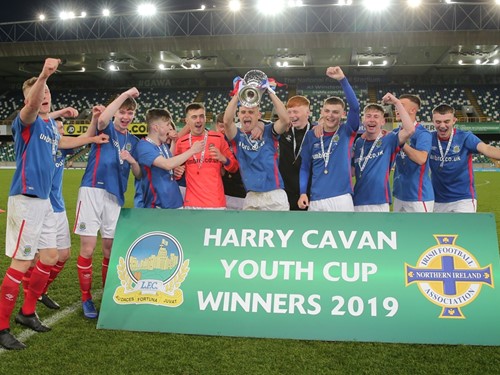 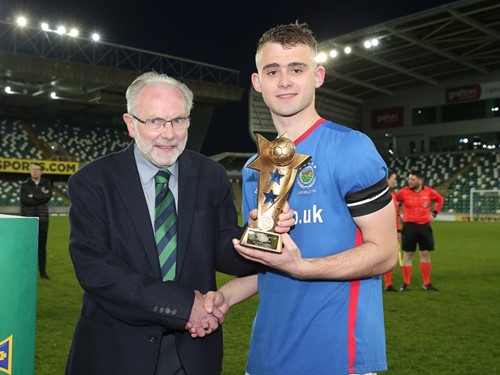 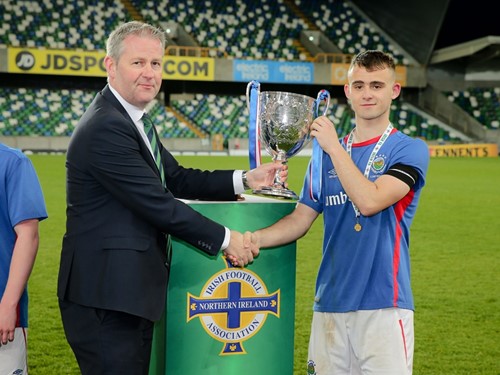 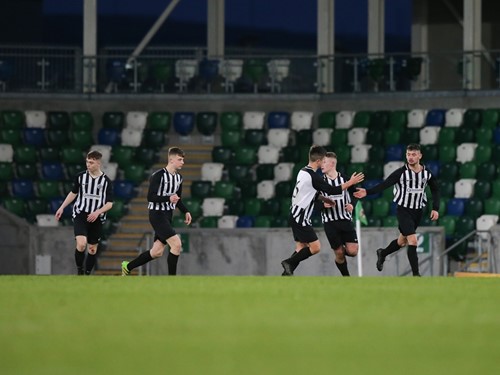 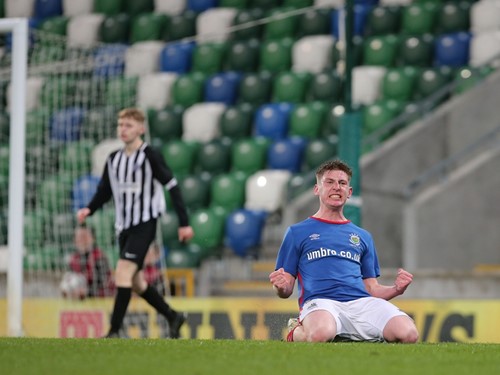 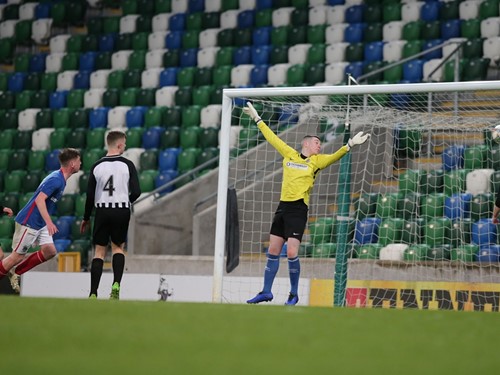 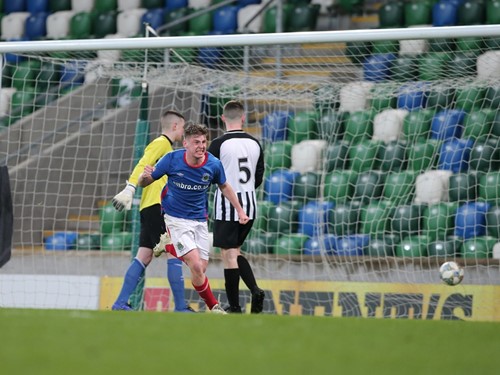 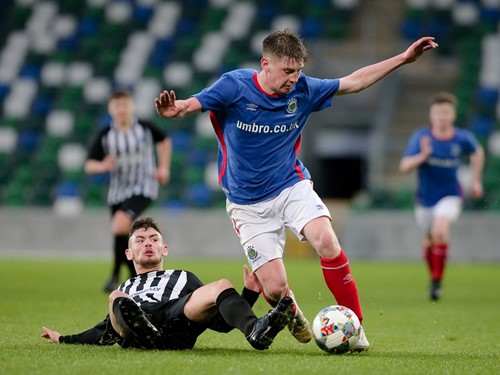 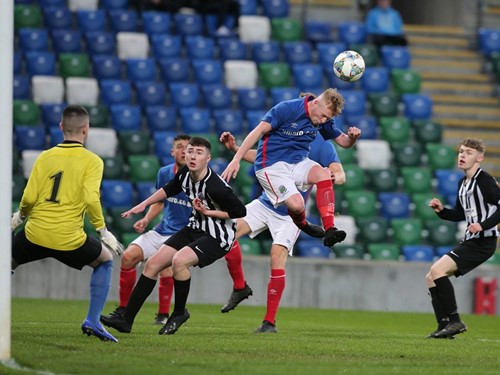 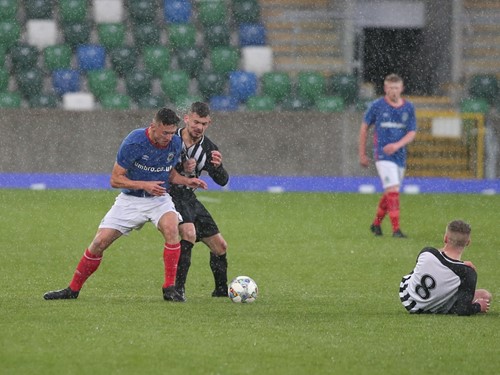 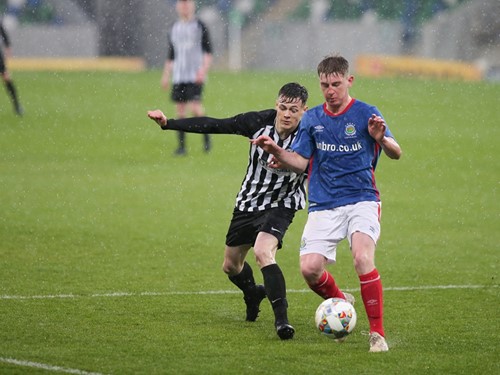 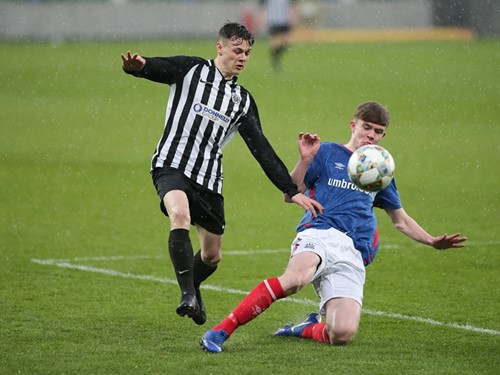