Tennent's Irish Cup final: Heavyweights and first-timers look to round off season in style 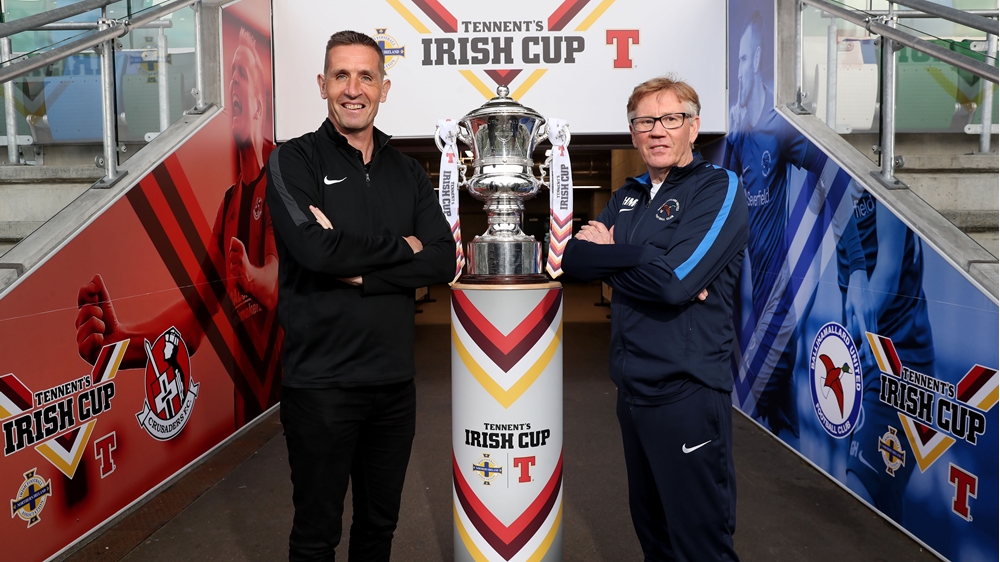 It’s a classic David v Goliath clash, the small village team from the country up against the big boys from the city.

However, when Ballinamallard United of the Championship take on Crusaders of the Premiership in the Tennent’s Irish Cup Final tomorrow (4 May), the form book could well fly out the window.

Crusaders, arguably the team of the decade in Northern Ireland, should stroll the game at the National Football Stadium at Windsor Park (2.30pm start), however the Mallards, managed by the canny Harry McConkey, will have other ideas.

After an indifferent league campaign, when they relinquished the league title, the Crues will be desperate to round off their season in style.

Stephen Baxter’s side certainly have the players to do it. If the likes of Paul Heatley, David Cushley, Rory Patterson or Jordan Owens are firing on all cylinders in the attacking third then Ballinamallard’s back line will have their work cut out to stifle them as the north Belfast outfit focus on winning a trophy they have not lifted for 10 years.

In midfielders Philip Lowry, Declan Caddell, Jordan Forsythe and Matthew Snoddy, they have ball players and tacklers who are a match for any side on these shores, while experienced defenders Colin Coates, Howard Beverland and Billy Joe Burns could arguably walk in to any side in Northern Ireland’s top flight.

Set pieces are a particular speciality of Baxter’s team. They have numerous players capable of outjumping and outbattling defences in the air.

As the undoubted underdogs Ballinamallard arguably have nothing to lose – and the Crues will have to guard against complacency.

Mallards captain and playmaker Richard Clarke, who won two Premiership titles with the Crues, could be a key figure in the match.

An Irish Cup winner during his time with Glentoran, he has the skills and know-how to control a game – and alongside him in the Mallards engine room are the lively Chris Kelly, who was superb in the semi-final victory over Warrenpoint Town, and experienced campaigner Jay McCartney, who has a trick or two up his sleeve.

Like the Crues, McConkey’s side have a strong spine. Apart from the accomplished midfield trio, they have the vastly experienced John Connolly between the sticks and two talented young centre backs in Matty Smyth and Ryan O’Reilly. And up front is Ryan ‘Rocket’ Campbell, a veteran striker who has bagged goals at all levels of the game.

With striker Joshua McIlwaine suspended, and young winger Sean McEvoy not available after being called up to the Republic of Ireland’s U17 squad for the U17 Euros, McConkey’s attacking options have been curtailed, but in Nathan Cashel and Robbie Hume, plus lively young winger Darragh McBrien, they have players capable of doing damage.

With Enniskillen’s rugby team winning the Towns Cup and Enniskillen grammar school St Michael’s GAA team winning the All-Ireland and Ulster GAA schools’ cups this year already, there is something in the water in Fermanagh these days. And, even though it is highly improbable given the opposition, the Mallards might just produce another great sporting moment/miracle in their first ever Irish Cup Final.