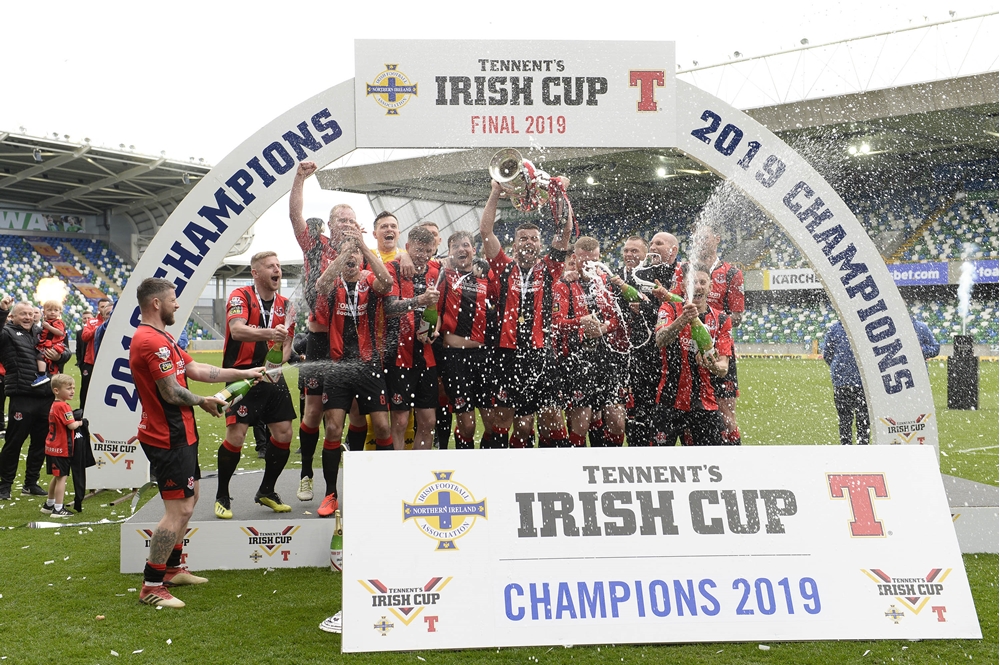 Crusaders produced a clinical performance to defeat Ballinamallard United 3-0 in the Tennent's Irish Cup final at the National Football Stadium at Windsor Park.

All three goals came early in both halves with Jordan Owens, Philip Lowry and Ross Clarke all finding the net.

The Crues got off to an ideal start when, as early as the sixth minute, they moved in front through Owens who looped a header over and beyond the reach of John Connolly after Billy Joe Burns delivered a cross from the right.

But after that Crusaders were very much in the ascendancy. In the following ten minutes Lowry and Jordan Forsythe threatened with headers, David Cushley attempted to whip the ball in at the top corner from around 25 yards before Forysthe sent Connolly scampering across the goalmouth to keep out a free-kick delivered from the left.

Then, with around half-an-hour on the clock, Paul Heatley fired the ball towards goal and it deflected into the path of Lowry six yards from goal but he couldn't make a clean connection which allowed the Mallards defence to clear.

Connolly was called into action again a few minutes after that but did well to thwart Declan Caddell with his legs at the near post.

Yet, despite being on the back foot for much of the game, the Mallards ended the half with some hope when a Darragh McBrien effort into the box was blocked by Lowry with the same player then sending another shot wide before Campbell then had a go.

Unfortunately for the Championship side that hope evaporated after the Crues hit them with two quick fire goals early in the second half.

On 47 minutes it was 2-0 after a Heatley corner was knocked in by Lowry via a deflection off Nathan Cashel followed, six minutes later, by substitute Ross Clarke's drive from the middle of the box after Heatley had knocked the ball back from the touchline. It was Clarke's first touch having replaced Cushley seconds earlier.

In between the goals Heatley twisted and turned on the left before driving the ball across the face of goal while Owens then turned a shot over after Sean Ward had sent a cross into the box.

To their credit, Ballinamallard kept plugging away, twice coming close to getting the ball into the box before Duwayne McManus then tested keeper Harry Doherty from 30 yards.

However, Crusaders managed to take the sting out of the game and almost extended their advantage with a quarter-of-an-hour remaining after Forsythe's throw-in from the right eventually found Michael Ruddy inside the area but despite doing well to control the ball just couldn't squeeze it past Connolly at the near post.

Ballinamallard might have earned a consolation soon after, though, when Cashel's ball from the left took a nick off Colin Coates but, luckily for the Crues skipper, it came back off the upright before falling to safety.

But nothing was to stop Stephen Baxter's side lifting the trophy after a gap of ten years and for the fourth time in the history of the club.