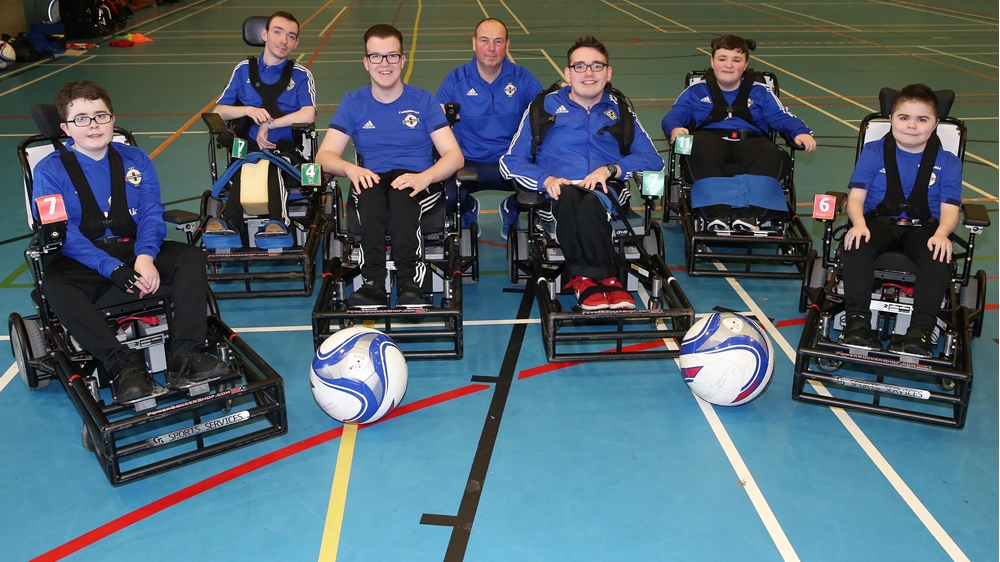 Northern Ireland’s Powerchair squad had their final get-together in Belfast yesterday before jetting off to Finland to take part in the European championships for the first time.

The six-strong panel are set to compete at the European Powerchair Football Association Nations Cup, the sport’s equivalent of the Euros, this week.

Seven teams will be battling it out to be crowned European champions at the four-a-side tournament, which is being staged at Pajulahti Sports Institute in Nastola, Finland.

Northern Ireland’s first match is against the host nation on Wednesday (22 May) at 7.30pm local time.

The following day they will face England (1345) and on Friday they will take on Austria (1030) and then the Republic of Ireland (1415), whom they played against in a warm-up match last weekend.

Their final round-robin games come on Saturday against France (0915) and Denmark (1415). Matches for final overall placings will be staged next Sunday (26 May).

And it will not just be about seeking Euros glory. The teams finishing in the top five positions in Finland will secure a place at the 2021 Federation Internationale de Powerchair Football (PFIPA) World Cup in Sydney, Australia.

Northern Ireland, who trained at Avoniel Leisure Centre in Belfast yesterday and will be heading to Finland on Tuesday morning, warmed up for the Euros with draws against Scotland (0-0) and Republic of Ireland (2-2) in a Tri-Nations Tournament staged at the Blair Mayne Leisure Centre in Newtownards last weekend.

Scott Hilland and Patrick Cumiskey, with a dramatic last gasp equaliser, were on target for Northern Ireland against the Republic. The Republic won the tournament with a 4-0 win over the Scots.

Northern Ireland team coach Michael Hilland said: “Powerchair football, through the support of the Irish FA and Disability Sport NI, has really developed over the past couple of years and we are ready to participate on the international stage.

“We have a young squad but their enthusiasm is infectious and after performing so well last weekend they just can’t wait to get going in Finland.”