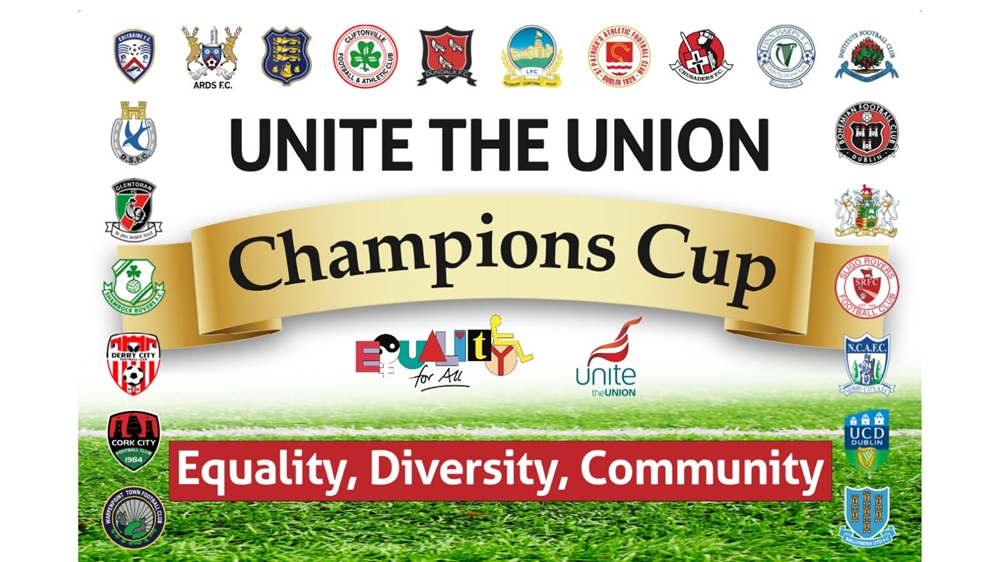 Sponsored by the trade union Unite, the competition will see the Danske Bank Premiership Champions play the winners of the SSE Airtricity League in a two-legged final.

The first edition of the competition will take place in November 2019 and will be formally launched at the Unite union’s Fifth Irish Policy Conference in Malahide on Monday May 13.

Unite have signed a three-year deal to sponsor the cross-border tournament with €50,000 set to go to the winners, €25,000 for the runners-up and a further €25,000 ring-fenced for community-based projects in the competing team’s local areas.

The first edition of the competition will feature current Danske Bank Premiership Champions Linfield and they will face the 2019 Champions of the SSE Airtricity League, with the season set to conclude in October.

Patrick Nelson, Chief Executive of the Irish FA, said: “This is a fantastic new cross-border competition and one that I am sure will capture the imagination of football fans right across the island of Ireland.

“I would like to thank Unite the Union for their sponsorship, especially for ring-fencing a significant sum for community projects. This is a competition that will bring people together and one that will have lasting benefits for clubs as well as fans.”

"I'd like to thank the IFA, in particular Patrick Nelson, who have been fantastic to work with on the project and it's great to see a cross-border tournament return. The clubs and players in the SSE Airtricity League are incredibly excited to see a competition like this back on the domestic calendar.

"I'd also like to thank Unite, in particular Brendan Ogle and his colleagues, for their sponsorship of the tournament and the community work they're committed to as part of the competition, both north and south of the border. It's a unique sponsorship and we're looking forward to help promote Unite's equality agenda."

Brendan Ogle, Senior Officer in the Republic of Ireland for Unite, said: "Our union has a strong anti-sectarian and anti-racist ethos, and we support gender and sexual equality campaigns. We salute the work done by civil society organisations to tackle racism in sport, and we hope to work with such groups to promote equality and diversity through the Champions Cup.

"Local communities and local clubs need support now more than ever and Unite wants to provide some of that support while sending a clear message: we can celebrate our own identities while respecting others."